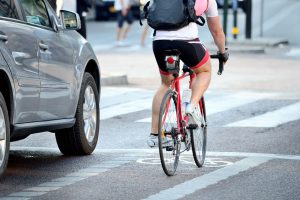 NEW YORK — An 18th bicyclist has been struck and killed in New York City traffic this year. Police say Em Samolewicz, 30, was riding on a Brooklyn avenue when she was run over by a tractor trailer.

According to police, Em Samolewicz was attempting to avoid an open door of a parked car on Third Avenue in Sunset Park. In the process of trying to avoid getting doored, she was hit by the tractor trailer near the intersection of 36th Street.

Em Samolewicz is the 18th bicyclist to be killed on NYC streets this year, and the city is on pace to double the number of fatal bicycle accidents recorded last year. Most of these accidents have happened in Brooklyn.

New York Mayor Bill de Blasio has said the city must take actions to better prevent bicycle accidents. Last week, the mayor pledged to install 150 miles of protected bike lanes in the city, and install other bike-friendly policies. However, some safety advocates say the plan lacks urgency – and while it could save lives tomorrow, it doesn’t address the crisis today.

For example, cycling advocates say Third Avenue, where Em Samolewicz was killed, is one of the most dangerous roads for bicycles. Samolewicz was the second death to happen on Third Ave this year, and the first happened under similar circumstances when a cyclist was doored by a parked car.

A New York bicycle accident lawyer says Third Ave has eight lanes for motor vehicles and none for bicycles, making it one of the most dangerous streets in the city for cyclists.

What To Do After An Accident

While fatal accidents are on pace to more than double last year’s count, injuries are rising at a similar pace in New York City. Dozens of cyclists have already been rushed to hospitals this year as a result of someone else’s negligence. After any type of bicycle accident, it’s crucial to file a personal injury claim that can help make sure your medical costs, lost wages, and other expenses are covered.

An experienced bicycle accident lawyer in Brooklyn will fully investigate an accident and identify the pieces of evidence that can help maximize your claim. Some of these factors include:

If you decide to contact Cellino & Barnes, we’ll put our best Brooklyn bicycle accident lawyer on your case so you can be confident your family will recover the best possible result. Call us or contact us online for FREE consultation.