Home » Blog » Aftermath of a Hoboken Train Crash a “Nightmare” 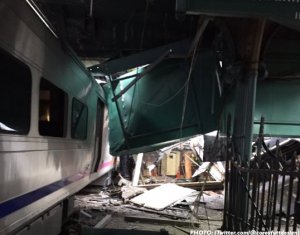 NEW YORK – At least one person was killed and dozens more suffered severe injuries when a commuter train crashed into a crowded Hoboken station during the morning rush on Thursday.

The crash caused a portion of the frequently-used terminal to collapse, leaving piles of debris scattered throughout the station.

According to CBS News, she had just dropped off her toddler at day care Thursday morning before leaving for the Hoboken Terminal in a rush. Friends and co-workers told CBS that Fabiola Bittar de Kroon had recently moved to New Jersey from South America.

The Hoboken train crash injured more than 100 others as it collided with the train station.

“You felt like this huge, huge bang,” passenger Steve Mesiano said to reporters. “The lights went off, and then you started to see like – I was in the window seat, so I could see like outside, what was happening, and the roof just collapsed on the first car.”

“The next thing I know, we are plowing through the platform,” passenger Bhagyesh Shah added in the NBC report. “It was for a couple seconds, but it felt like an eternity.”

“From the fifth car, it felt like a major skid,” passenger Jason Danahy told The Times. “A creaking noise and a skid. I was lucky to be on the fifth car.”

Many other passengers tweeted they felt “lucky to be alive.”

Others weren’t so fortunate and many passengers are still asking, why did this happen?

Authorities said the crash on the Pascack Valley Line was either accidental or caused by operator error, according to reports from NBC New York. Reporters said it appeared the train went through a bumper stop on the track, crashing into the building.

With most train accidents, a detailed legal investigation will look at all the possible factors that may have contributed to, or directly caused a crash.

New York train accident lawyers not only investigate operator error and potential track flaws, they also look into mechanical issues and any structural faults with the station itself, all of which may have contributed to the Hoboken train crash.

Many injured passengers suffered a variety of injuries and in most cases, medical care is necessary. It is currently estimated that over 100 people were hurt and the Jersey City Medical Center was expecting to receive roughly 50 patients immediately following the crash, The Times reported. Other injured passengers were taken to Hoboken University Medical Center and to Christ Hospital, less than two-miles from the Hoboken train station.

According to a New York train accident attorney, injured passengers often need legal assistance after a crash. Some passengers and families will be looking for help with paying medical bills or receiving compensation for missing time from work or for pain and suffering.

Passengers Nancy Bido, Steve Mesiano, Jason Danahy, and Bhagyesh Shah told reporters there were many people who were visibly injured. Due to the severity of the crash, doctors anticipate more injuries will be reported in the near future.

Many injuries can manifest hours, days or even weeks after a severe train crash. According to doctors, these injuries can cause severe pain if left untreated.

An experienced train accident attorney can gather all the evidence a victim needs to get the best result possible. An attorney should look for evidence including:

More than 100,000 people use NJ Transit trains to commute from New Jersey to New York on a daily basis. Hoboken is one of the busiest stations in the tri-state area and records over 15,000 passengers each day.

If investigators discover any flaws with the trains, the engineer or the station itself, the findings will be reported to the Federal Railroad Administration and the National Transportation Safety Board, who are logging the accident.