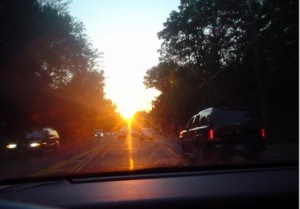 BUFFALO, N.Y. – This time of year can be dangerous for anyone who uses the road. Pedestrians, bicyclists and drivers are at all at risk because of the sun.

During the spring and fall, the sun can cause what’s called “sun blindness,” or sun glare – and it can be incredibly dangerous for those who behind the wheel.

A Buffalo car accident attorney at Cellino and Barnes says this condition spikes because of an astronomical event that only occurs twice in a year.

“Drivers are most at risk of sun glare during the fall and spring because that’s when the sun directly rises in the east and sets to the west of Buffalo,” car accident lawyer Steve Barnes said. “Sunrise and sunset times also coincide with rush hour times and that can make the roads a dangerous place.”

Making matters worse, most cities are constructed on what’s called a “grid.” This means the roads, for the most part, run east to west and north to south.

According to one British study, sun glare causes roughly 3,000 accidents each year – and due to the fact that the U.S. boasts more drivers, the number of accidents could be much greater in America.

The bright sunlight could be affecting drivers differently depending on their age, a recent federal study suggested. Older drivers were found to be more likely to cause a crash if their vision was obstructed by a glare. The study also notes that other bright objects, like billboards and headlights, can also cause vision impairments for the elderly.

According to statistics from the National Highway Traffic Safety Administration, 38.5 percent of the drivers who reported a glare-related crash were over the age of 45.

“Glare can be a difficult problem to address – especially on bright spring days but there are many steps drivers can take to prevent an accident,” Barnes said. “So, while a glare can be a factor; it’s not an excuse and drivers need to take responsibility for their actions if someone gets injured in a crash.”

Buffalo car accident lawyers suggest putting sunglasses in your vehicle, just in case. Many sunglasses can minimize sun glare – and most cars have a convenient compartment to hold your shades.

Safety advocates also suggest considering alternate routes during your morning and evening commutes. Using north-and-south roads should allow you to avoid sun glare – or you can do a little research and plan your commute well before or after sunrise and sunset.

Finally, attorneys say if you are getting blinded by the light, slow down. Speed is also a factor in many glare-related accidents. Slowing down could save a life.