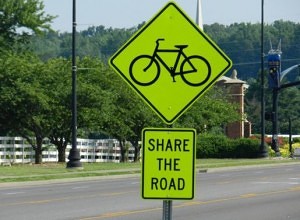 BUFFALO, N.Y. – For years, bicyclists across the country voiced their concerns about safety, or the lack of safety, in many major U.S. cities. However, statistics show some of those cities still lack the proper infrastructure for a safe riding environment.

Many communities are now beginning to rethink the way roads, streets and intersections are designed to account for bicyclists. Bike lanes are a relatively new development for east coast cities but are commonly incorporated into new road designs. However, a well-planned infrastructure may not be enough.

“Many drivers seem to forget we all need to share the road,” Cellino said. “In most areas, a bicyclist has just as much of a right to use that street as a driver does.”

The National Highway Traffic Safety Administration (NHTSA) last collected bicycle accident statistics with the U.S. Department of Transportation (DOT) in 2012. That year, 726 bicyclists died in traffic accidents and 30 percent of those deaths happened at intersections.

“That tells us there’s a real problem today making bicyclists extremely vulnerable at traffic lights and stop signs,” Cellino said. “Drivers should be more aware of bicyclists and pay particular attention to their surroundings when making left and right turns.”

The NHTSA data also suggests bicyclists should be educated on the rules and courtesies of the road as well.

Although it is not illegal in some areas, bicyclists found to be riding without a helmet greatly increased the risk of serious injury or death and according to statistics, one in four bicyclists killed had blood alcohol concentrations registering over .08 grams per deciliter.

“Bicyclists are considered vehicle operators and they’re required to obey the same courtesies and rules of the road as everyone else,” Cellino said. “That means stopping at stop signs, obeying traffic signals, and yielding to others.”

According to the 2012 statistics, 49,000 bicyclists were treated in hospitals after a crash in addition to the 726 fatalities. Independent studies discovered cities with higher education campuses were more vulnerable to bicycle accidents and many large campuses, like Ohio State University and the University of Illinois have since invested millions into developing safer infrastructure for bicyclists following high-profile accidents.

“Transportation departments are now constructing bike lanes to make the streets safer but drivers and bicyclists need to be aware of these changes and know how to safely navigate the roads together,” Cellino said. “Education is the biggest key to making streets safer for everyone.”