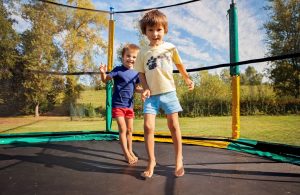 ROCHESTER, N.Y. – The sun is shining and it’s a great time to get outside. This time of year, the trampoline is a popular place for kids to spend time and lots of energy but it can also be a dangerous place.

Doctors and safety advocates are now warning parents of the dangers trampolines pose, if used incorrectly. According to one recent study in Ireland, 40-percent of children who suffered a trampoline injury needed surgery.

A Rochester personal injury lawyer at Cellino & Barnes says when injuries do occur in back yards, bounce houses or at trampoline parks, they’re often very serious.

“Trampoline use has become very common and injuries are skyrocketing as more trampoline parks open across Rochester,” personal injury lawyer Ross Cellino said. “In almost every case we see, the injuries are entirely preventable.”

According to the Irish study conducted this year, 35-percent of trampoline-related injuries were directly related to the presence of others on the bouncing structure.

In nearly half of the cases, there was no adult supervision.

Safety advocates are growing increasingly concerned over the boom of indoor trampoline parks across America. According to recent estimates, there are more than 350 parks in North America; with hundreds of new ones opening every year.

In many cases, children have been seriously injured at these parks and safety can sometimes be neglected.

In 2013, a Texas teen fell through a torn trampoline, fracturing his head. A jury awarded his family nearly $11.5 million earlier this year.

“Trampolines can be very dangerous if they are not properly cared for or if they’re being used in unsafe ways,” Cellino said. “It’s our goal to reduce these injuries by making sure everyone is being as safe as possible while at the same time, having fun.”

Doctors and safety advocates advise parents to supervise children when using a trampoline and to follow these general guidelines:

As huge supporters of Central and Western New York communities, Cellino & Barnes hopes to make our neighborhoods safe for everyone. If your family member has been injured by someone else’s negligence, contact one of our attorneys today for a free consultation.