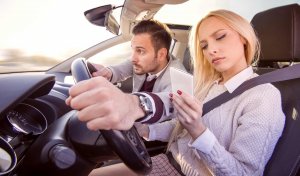 BUFFALO, N.Y. – After years of progress, the number of road collisions is on the rise again and if you believe in statistical trends, brace yourself for more crashes.

According to a statistical analysis from Allstate Canada, there’s been a slow but steady uptick in the number of claims. Last year, Allstate announced that it had identified a trend towards rising numbers of collisions and this year, the insurance company says its latest study demonstrates that the trend isn’t changing. In fact, the roads might be getting more dangerous.

A Buffalo car accident lawyer at Cellino & Barnes says the statistics mirror those seen here in the United States – where motorists have experienced the biggest spike in traffic deaths in the last 50 years.

What began as drivers taking calls or sending text messages is now a much bigger problem today: we can browse the internet, listen to music, use apps, get directions, and even watch videos on our phones from the driver’s seat. Most of this activity is illegal in the U.S. but at any given moment, over 600,000 drivers are using smartphones or other electronic devices while operating their vehicle, the National Highway Traffic Safety Administration estimates.

It’s easy to imagine how a distracted driver could cause a crash: failing to stop at an intersection, stopping short in traffic or not paying attention to their surroundings.

So, it’s not a coincidence that those types of crashes are also the most common accidents on the roads. According to Allstate Canada’s crash data, the most common claims involve:

The roads also get more dangerous as drivers get closer to the end of the work week.

Data suggests that Fridays are the most dangerous days of the week, accounting for 17-percent of all collision claims. Most of these claims involved:

Buffalo car accident attorneys say the evidence suggests that drivers are not only more distracted than ever before; there’s also more traffic and even the most careful drivers must be defensive and on the look-out for others who could put their safety at risk.

If you’ve been injured by a negligent driver, trust the firm that New Yorkers have turned to for over 50 years. With multiple offices conveniently located throughout Western New York, the Buffalo car accident lawyers at Cellino & Barnes can help you and your family get the best result possible.