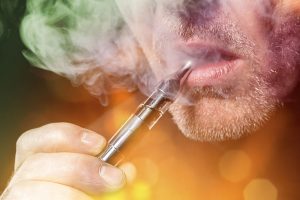 NEW YORK – It used to be ‘cool’ to carry a pack of reds and a lighter. Not anymore. Americans are kicking the habit of smoking; and one of the biggest reasons for the sudden trend is the mass-production of e-cigarettes… but they’re not necessarily as safe as marketed.

The jury is still out on whether e-cigs can be considered a ‘healthy’ habit. Most doctors agree it’s healthier than its predecessor, the tobacco-laced cigarette. But as e-cigs have grown in popularity, reports of severe injuries have spiked.

A New York e-cig injury lawyer at Cellino & Barnes says many New Yorkers plan to quit smoking by vaping but that plan could blow up in your face. Sometimes, quite literally.

“E-cigs are often marketed as a safer way to get a nicotine fix but some of the products are so unstable, they’ve been known to explode with such force that it sends a person to the hospital in New York,” e-cig lawyer Steve Barnes said. “These explosions happen with little to no warning and the injuries they cause are on the rise.”

According to the U.S. Fire Administration, over 2.5 million Americans are using electronic cigarettes and more are jumping on the wagon every day. Between 2009 and 2014, more than 25 incidents were reported in the news but since then, e-cig injury lawyers say the injuries have skyrocketed.

In just the last week, at least three media outlets have published stories about e-cigarette injuries:

In Indianapolis, doctors at the Richard M. Fairbanks Burn Center sent out a warning to consumers after they experienced a significant spike in the number of patients with leg burns after leaving e-cigs in their pockets.

According to the report, doctors at this one treatment center alone have received at least three patients with second and third degree burns in the past six months.

In Seattle, at least 14 people have been hospitalized at Harborview Medical Center for serious burns and cuts when an e-cig ignited and exploded. The Seattle Times reports the hospital is receiving about two patients each month with e-cig injuries.

In Mobile, Alabama, doctors also reported a spike in e-cig injuries. Mostly burns, the USA Medical Center said seven patients with e-cig burns were treated in the last six months. According to WKRG, Alabama doctors noted that e-cigarette batteries were to blame and many patients weren’t even aware the batteries could blow-up on them.

“Lithium batteries can be very unstable, especially when they’re exposed to extreme heat,” Barnes said. “When these batteries fail, they can unexpectedly ignite and cause the entire device to explode like a bomb.”

Lithium-ion batteries are the same power devices linked to hoverboard fires. Safety advocates say many batteries, like those used in laptops, have passed rigorous testing and have fail-safe mechanisms to prevent fires or explosions but some manufacturers are cutting corners.

This is especially true in the e-cigarette market.

Many e-cigs have been found with poorly made lithium-ion batteries, most often manufactured overseas. Some of these foreign manufacturers fraudulently stamp name-brand logos on their products in an effort to increase sales. New York e-cig injury lawyers say this act is not only illegal in the U.S., it’s also very dangerous.

“Many name-brand battery manufacturers put their products through rounds and rounds of safety testing to ensure that the battery won’t malfunction and explode,” Barnes said. “When this testing is ignored, lithium-ion batteries can become deadly.”

If you’ve been injured by a faulty e-cigarette, you may be entitled to significant compensation for your injuries.

The New York e-cig injury attorneys at Cellino & Barnes are leading the charge to help victims get justice. Contact a lawyer today to get started.

Like Cellino & Barnes on Facebook to stay up-to-date on new safety information and news about e-cigarette injuries.