Home » Blog » This is More Dangerous than Texting While Driving 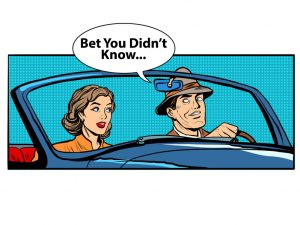 ROCHESTER, N.Y. – It’s been hammered into your brain: using your phone while driving is a very dangerous (and usually illegal) activity. We’ve been telling drivers this for years – and for good reason; more than 1.5 million car crashes are caused by drivers attempting to multi-task with a phone. Texting while driving is 6x more likely to cause a crash than driving drunk. Despite these statistics, at least one other activity is considered more dangerous.

Chatting with your passenger.

According to data from the National Highway Traffic Safety Administration (NHTSA), more than half of the nation’s recorded distracted driving crashes involved drivers having a conversation with passengers.

A Rochester car accident attorney at Cellino & Barnes says all distractions can have dangerous consequences but most drivers don’t even realize they’re being distracted by their buddy next to them.

“Distracted driving is most often associated with smartphone use but the problem is much larger than some drivers realize and it has a real impact on families in Rochester,” car accident lawyer Ross Cellino said. “Conversations in general – whether it’s on the phone or in-person – can take a driver’s mind off the road and every time that happens, your risk of causing a car crash goes up.”

Conversations with passengers are behind a stunning 57-percent of distracted crashes. Phone use is only associated with 12-percent of crashes. Many more crashes have multiple factors, adding to the potentially disastrous equation.

In fact, interacting with passengers is the most common activity in the car, aside from the actual operation of the vehicle.

“There’s no doubt that using your phone is risky but most drivers understand it’s dangerous,” Cellino said. “What many drivers don’t clearly understand is the risk of simply talking with someone else in your car.”

The Insurance Institute for Highway Safety (IIHS) discovered that most drivers ‘overcompensate’ when using a phone. According to its research, some drivers will only text while sitting in traffic or at red lights; and phone users drive an average of 5 to 6 miles per hour slower.

Drivers rarely slow down when they’re talking to a passenger. In most cases, drivers go faster when they’re angry or experiencing heightened frustrations.

“Driving is a head game, and it requires a lot of discipline and focus,” Cellino said. “After all, it’s not just your life at risk – there are so many people that we work with on a daily basis that were just in the wrong place at the wrong time and it’s heartbreaking to know that their situation could be different without a distracted driver behind the wheel.”

Beyond talking to a friend or using a phone, drivers are wrapped-up in distractions. Most of the time, drivers aren’t distracted by anything in particular but they can be considered ‘distracted.’ They’re constantly thinking, day dreaming or just losing focus.

It’s a lot easier to get distracted than most drivers think – and they often blame the wrong things.

If you’ve been injured in a car crash, the other driver may have been distracted. The Rochester car accident attorneys at Cellino & Barnes will investigate a car crash to the fullest extent to help clients obtain the best results possible.

Contact our car accident lawyers today for a free consulation.