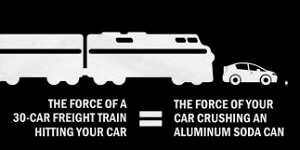 NEW YORK – Hundreds of people are killed in train collisions every year. On Monday, seven more died in a fiery crash in Valhalla when a Metro North train carrying over 400 passengers struck a car stranded on the tracks, authorities said.

The crash is just the latest disaster to happen on Metro North tracks. According to Federal Railroad Administration records, a truck was slammed by a train at the exact same rail crossing in 1984. The 21-year-old driver was killed.

In just the last two years, the National Transportation Safety Board (NTSB) investigated how more than 60 people were injured as a result of four different derailments or collisions on Metro North lines.

In 2014, an electrician was hit and killed by a northbound train in Manhattan. Investigators found the crash was caused by miscommunication and poorly understood safety procedures.

In 2013, a track foreman was killed after being hit by a train speeding at 70 miles per hour. determined railroad administrators did not implement safety recommendations that could have prevented that accident.

Later the same year, a deadly derailment killed four people and injured dozens of others in the Bronx. the train was traveling 82 mph around a left-hand curve, and a 30 mph zone. It was later determined that the engineer had fallen asleep and Metro-North did not have a policy requiring medical screening for sleep disorders.

Several of these crashes resulted in lawsuits because safety procedures were not always followed or required by railroad administrators.

According to Operation Lifesaver, rail crashes have been steadily decreasing since the 1980’s because of strict regulations put in place over the last few decades.

“Every three hours in the U.S., a vehicle or a person is hit by a train,” Operation Lifesaver president, Joyce Rose said. “[Tuesday’s crash] highlights the critical need for all drivers to use caution at every highway-rail grade crossing.”

Although the accidents have decreased in the last three decades, trains are still responsible for more than 200 deaths and nearly a thousand injuries every year.