Home » Blog » Defective Airbags Are Still Getting Installed in Cars 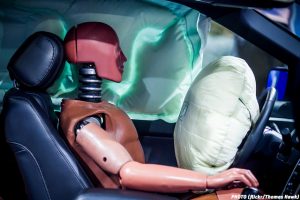 Currently, more than 40 million vehicles are being recalled due to faulty air bag inflators manufactured by Japan’s Takata Corp. According to the National Highway Traffic Safety Administration, the air bags have been known to explode with such force that it creates deadly shrapnel that can seriously injure or kill drivers and passengers.

It’s safe to say that many American politicians are not happy with the findings in the new report which was issued on June 1st. Federal safety regulators recently expanded the recall to include an additional 35-40 million vehicles, adding to the already record recall of 28.8 million inflators.

A Long Island car accident lawyer at Cellino & Barnes says the recall is becoming a crisis because there are not enough parts to fix the extraordinary number of vehicles being called back.

“This company held 20 percent of the world market at one time so there could be millions of vehicles with dangerous air bags in Long Island,” car accident lawyer Steve Barnes said. “Even if repair shops had the parts to fix all of these vehicles, many drivers could be waiting years just to get an appointment with a mechanic.”

The issue boils down to an explosive chemical called ammonium-nitrate, which rapidly inflates the air bag but in hot, humid conditions the chemical can degrade. Many manufacturers have addressed the issue by including a drying agent, which absorbs moisture within the inflator, but not all cars are being sold with the safer chemical mixture.

The Senate report found that some automakers continue to sell ammonium-nitrate inflators without a drying agent. According to federal officials, this is legal but the new vehicles must still be repaired by 2018.

In total, the largest auto recall could expand to impact over 70 million vehicles.

“Consumers are now buying new vehicles without realizing that they’re going to be recalled in a couple years,” Sheehan said.

A ranking Senator on the Senate Commerce Committee said the new findings are troubling for anyone who owns or plans on buying a new vehicle.

“It is absolutely ridiculous that the American consumer buys a new car, only to find out in two years that it’s going to be recalled,” Sen. Bill Nelson (D-FL) said at a news conference in his Tampa district office on Wednesday. “These cars shouldn’t be sold until they’re fixed.”

Takata inflators are suspected to be a factor in 13 deaths and more than 100 injuries around the globe.

Currently, automakers are not required to disclose whether new vehicles have potentially defective air bag inflators and some manufacturers may not disclose the recall until 2019.

The NHTSA says most vehicles are safe to drive and the inflators do not become dangerous until long-term exposure to hot, humid environments. Safety regulators say newer vehicles, at least in the short-term, are much safer than older models.

However, injuries are still occurring at astounding rates. If you’ve been injured due to any defective car part, the Long Island car accident attorneys at Cellino & Barnes have helped clients obtain more than $1.5 billion in settlements and verdicts. Contact an experienced lawyer today for a free case evaluation.