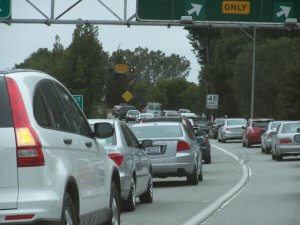 BUFFALO, N.Y. – You’re spending a lot of time behind the wheel. You’re not alone either – most Americans are in their cars roughly 17,600 minutes each year.

Let’s put it another way: that’s roughly seven 40-hour work weeks (but you’re probably not getting paid to commute).

The numbers are all laid out in new research conducted by the AAA Foundation. According to year-by-year comparisons, people are traveling more often and Buffalo car accident lawyers say that generally makes the roads more dangerous.

“As our roads become more congested, the risk of an accident goes up in Buffalo,” car accident lawyer Steve Barnes said. “We’ve certainly seen a drastic increase in the number of car crashes just in the last year, resulting in hundreds of thousands of injuries.”

The AAA Foundation says each person is traveling an average of 10,900 miles per year. Many accident statistics have shown that car accidents often have a direct correlation to the number of miles driven – and both have gone up in the last year.

Even though distracted driving incidents have hit an all-time high, the car remains a central part of our lives as Americans. Due to these facts, Buffalo car accident attorneys say safety should be everyone’s top priority but it’s often pushed to the back seat.

“We help our clients get fair compensation after they’ve been injured in a car crash, so we investigate accidents and comb over every detail to make sure our clients get the best result possible,” Barnes said. “Over the course of our investigations, we’re finding distracted driving is now a factor in most car crashes and with more cars on the road, anyone can be a victim of a driver who isn’t paying attention.”

Nearly 90-percent of Americans of the age of 16 have driven a vehicle in the last year. In total, Americans have logged almost 2.5 trillion miles in just 12 months, a 2.5 percent increase from 2014.

With so many cars traveling further than ever, the roads and highways are risky places to be.

One of the largest personal injury law firms in New York, Cellino & Barnes assists injured clients with their legal needs. With multiple offices in Buffalo and across New York State, car crash victims can easily meet with an attorney in person or call (800)888-8888 for a free consultation.