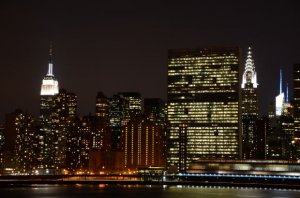 NEW YORK – More than 100 pedestrians and bicyclists have been run over on city streets this year, a 12-percent jump from 2015.

Another incident happened on Monday as Nuesa Marques-Diniz, 68, was struck and killed by an electrical truck while crossing 42nd Street between 5th Avenue and Madison Avenue.

According to the New York Daily News, Nuesa Marques-Diniz was a Brazilian national who had recently left a nearby McDonald’s when the truck, owned by Hugh O’Kane Electrical Co. struck her at around 8pm Monday night.

Police told the Daily News that Nuesa Marques-Diniz died at the scene.

A Manhattan truck accident lawyer says truck drivers have a responsibility to drive and operate their trucks as safely as possible but there are many more factors that need to be scrutinized – including safety concerns with the roadway itself.

Each year, thousands of people are injured or killed in truck crashes that are traced back to driver fatigue. A thorough legal investigation will look into a truck driver’s record and the number of hours the driver has spent behind the wheel and working.

In addition to driving records, an extensive legal investigation will look at other factors that could help maximize the compensation for a victim and their family. These factors can include:

Dozens of other pedestrians have been struck by trucks on Manhattan streets this year and many victims have been killed as a result. Victims and their families may be entitled to receive significant compensation for an injury or a loss of a loved one. This compensation can help cover:

A successful claim could also help improve safety for others in New York City so accidents like the one that claimed the life of Nuesa Marques-Diniz can be prevented in the future.