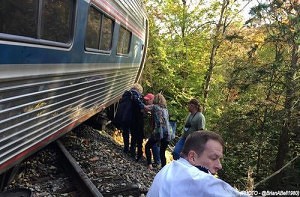 NEW YORK – Another train derailed Monday morning, injuring at least 7 passengers in central Vermont. Officials say the train struck a rockslide about 10 miles south of Montpelier, the state’s capital. At least one person was seriously injured, according to news reports.

The train named the “Vermonter” travels between St. Albans City in Vermont to Washington D.C. with stops in Connecticut, Manhattan and New Jersey.

The National Transportation Safety Board and the Federal Railroad Administration sent investigators to the site of the crash, one of several train derailments being investigated this year.

Manhattan train crash attorneys at Cellino & Barnes say passengers could have died in a crash like this and the scenario may have been prevented with adequate safety features.

“These crashes happen too often on trains heading to or going through Manhattan,” train crash attorney Ross Cellino said. “Train companies have promised safety but we still see dozens of derailments and more injuries each year.”

Vermont Gov. Peter Shumlin blamed the Vermonter’s crash on a “freak of nature,” saying rocks above the tracks broke off and tumbled into the path of the train, owned and operated by Amtrak. The tracks are owned and maintained by the New England Central Railroad.

A total of five cars fell off the tracks.

While an investigation will officially determine the cause of the crash and if anything could have prevented it, Manhattan train crash attorneys say the area is known for rock slides.

“Many mountainous highways have nets along the side of the road to trap rocks from falling into the paths of oncoming cars,” Cellino said. “The same principle could be applied to train tracks.”

Passengers on the Vermonter said the crash was like ‘severe turbulence;’ as people and luggage were tossed around in the cabin. Some of the luggage reportedly hit passengers and some of the seats came loose.

Seat belts are not a practical option to improve passenger safety, according to a 2006 study by the Transit Cooperative Research Program. Experts say most injury crashes can be blamed on broken rails, which the Federal Railroad Administration is responsible for inspecting.

A new technology called Positive Train Control (PTC) would reduce the number of accidents, officials said. Congress signed legislation that would mandate all trains to be equipped with PTC, which uses satellites to monitor and control certain aspects of a locomotive. However, many train companies have not installed the safety feature and have asked Congress to extend the deadline, which is slated to expire at the end of the year.

Monday’s derailment happened along a stretch of track that will be exempt from the December 31 congressional deadline to install PTC.

As part of the 2008 Rail Safety Improvement Act, the Federal Railroad Administration determined what rail lines would need positive train control, putting the highest priority on routes carrying passengers and toxic chemicals. Congress gave the agency freedom to exclude rail lines it determined did not carry a significant amount of traffic. New England Central rail lines were among those that met the criteria for exemption.