Home » Blog » Gravity Can Be a New Yorker’s Nightmare 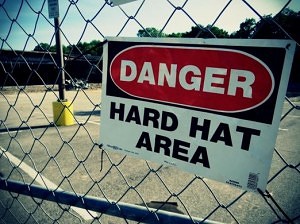 NEW YORK – There’s a famous phrase coined by Sir Isaac Newton; “what goes up must come down.” In the sprawling concrete jungle of New York, everything is going up. New skyscrapers and multi-story buildings are being built every day, defying Newton’s warning. Unfortunately, construction poses risks not only to workers but the people walking by.

In March, a young woman was struck and killed by a plywood board that was blown off a construction fence in Greenwich Village. Although this sounds like an extremely rare and unlucky event, falling tools, glass, or other objects injure a person more than 12 times per year.

According to a Wall Street Journal analysis of city Department of Buildings records, there were 96 construction accidents involving pedestrians or bicyclists in New York City between 2008 and 2014. These accidents resulted in 155 injuries, most of which occurred in Manhattan.

“In the cases we see, negligence is usually a factor in these kinds of accidents and it’s not the workers but the construction companies held responsible,” said Cellino, a co-founder of the Law Offices of Cellino & Barnes. “Our laws and regulations require managers to have safety measures in place so construction accidents don’t happen but we get cases every day coming from construction sites.”

In 2014, 18 construction accidents involving non-workers were reported to New York City. Although no one was killed, fences have been blown over or, in some other way, struck pedestrians in 16 separate events, injuring 23 people, the Journal’s report revealed.

In 2011, a construction worker dropped a hammer from a scaffold, striking a child in the head.

A building code revision put in place last year now requires construction fences to be built to withstand 80 mph winds however, other accidents are happening at the highest rate in years.

“It’s not just pedestrians getting hurt either,” Cellino added. “Cars are getting struck by falling objects and several people have been hurt because falling debris like bricks came crashing down on top of a vehicle.”

Construction accident lawyers say it’s not just New York going through growing pains either; any city with construction sites can potentially put those passing by at risk.