Home » Blog » How to Avoid the Rear-End Crash 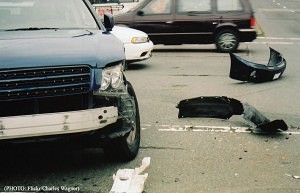 NEW YORK – Each year, there are nearly 2 million rear-end collisions on American highways. It is the most common type of car accident on roadways today, often caused by distracted drivers or adverse weather conditions. Although these crashes may seem minor, rear-end crashes have resulted in nearly 2,000 deaths and another half-million injuries.

In a new report, the National Transportation Safety Board (NTSB) made a bold statement: More than 80 percent of these deaths and injuries might have been mitigated had the vehicles been equipped with a collision avoidance system.

“You don’t pay extra for your seatbelt,” said NTSB Chairman Christopher A. Hart in a statement. “And you shouldn’t have to pay extra for technology that can help prevent a collision altogether.”

Researchers have found the new technology can detect vehicles and objects ahead of them and brake automatically. The devices are currently available in some cars but are usually attached to luxury vehicles and at a higher cost.

New York car accident attorneys at the law offices of Cellino & Barnes believe if the technology will help prevent crashes it should be standard on vehicles.

“Seatbelts work, air bags work, we’ve seen how these devices significantly reduce the risk of serious injury and death in New York,” car accident attorney Steve Barnes said. “If crash avoidance systems will make the roads safer, they should be available to everyone and not just those who can afford the safest technologies.”

According to federal authorities, only 4 out of 684 vehicle models in 2014 included a complete and standard forward crash avoidance system. When the technology is offered as an additional option, they’re usually bundled with other features at a higher price, making consumers less likely to invest in the safety system.

“There’s no reason safety should be extra,” Barnes said. “Every responsible driver should be comfortable knowing they have the best safety features on the road today.”

In a separate report accompanying the NTSB recommendations, federal officials pointed to a study by the National Highway Traffic Safety Administration which found that 87 percent of rear-end collisions happened because the driver simply wasn’t paying attention to the road.

New York car accident lawyers said if crash avoidance systems do become standard in future vehicles, it’s not an excuse to use a vehicle recklessly or while distracted. Barnes said no matter what safety features are installed, drivers should always pay attention to the road and traffic around them.