Home » Blog » In the Headlights 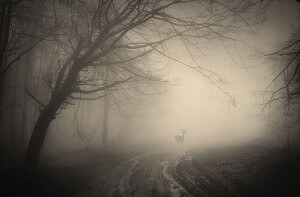 BUFFALO, N.Y. – You’re driving home from work and it’s dark; suddenly, something jumps in front of you and you swerve to avoid it. It’s common this time of year and you’re most likely to hit a deer while driving this month than at any other time of year, according to new research from the University of Georgia.

While many people might think deer are majestic forest animals, they’re a disaster waiting to happen for drivers. The study, conducted by the UGA Deer Laboratory used crash data and breeding studies to determine that most deer-car collisions occur between mid-October and mid-December.

Buffalo car accident attorneys at Cellino & Barnes said drivers need to slow down this fall – especially in areas where deer and other animals are present.

“It’s important to know what to do if you encounter a deer in the road around Buffalo,” car accident lawyer Ross Cellino said. “Slow down, pay attention and understand how dangerous swerving can be.”

When you see a deer in your headlights, you may want to swerve to avoid it – and the costly repairs to your vehicle but attorneys say drivers should never swerve.

“Swerving into another lane can be even more dangerous,” Cellino said. “There’s a high risk of losing control of your vehicle and an even higher risk of injury.”

Collisions with deer are some of the most common types of car accidents in Western New York but the deadliest accidents blamed on deer occur when a driver swerves. Swerving can place you in the path of an oncoming vehicle or it could send you off the road – possible striking a tree.

According to deer researchers, the spike in accidents is due to “rutting season,” when deer move around in a search for mates. This type of migration is also associated with unpredictable behavior, making it difficult for drivers to determine where a deer is moving.

Buffalo car accident attorneys recommend slowing down – particularly at dawn and dusk when deer are most likely to be found crossing roadways. Scan both sides of the road too – as deer can suddenly dart into the roadway from either direction.

If you are ever injured in an accident, call 9-1-1 immediately. If your injuries are due to someone’s negligence, contact an attorney Cellino & Barnes for a free evaluation.