Home » Blog » Is NYC the Worst City for Driving? 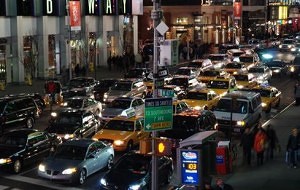 NEW YORK – Unless you refuse to ride in anything with more than two wheels, you’re likely to rely on cars, trucks, taxis, or buses to get to work, school, the grocery store, and wherever else life takes you. Unfortunately, the city you live in could make that commute a lot more difficult and New Yorkers get the worst of it, according to a WalletHub study.

For many of the commuters, more than 200 hours are spent each year between the white and yellow lines of highway monotony. Researchers trying to cut down on commute times ranked the 100 most populated U.S. cities by analyzing the costs of car ownership, traffic and road conditions, highway safety, and other key metrics. New York City placed dead last (yes, even behind Los Angeles).

“There are more than 70,000 crashes every year in New York,” car accident attorney Ross Cellino said. “These crashes result in over 60,000 thousand injuries.”

Although thousands of people are hurt each year in car crashes, safety was New York’s one bright spot, placing in the top 10 safest cities in the nation, according to the study. However, with a density of 28,000 people per square mile, accidents are always lurking around the corner.

The city ranked dead last (or near 100) in almost every other key metric.

“Add up the fuel costs and parking cost, it’s certainly doesn’t make New York an easy place to commute,” Cellino said. “On top of the costs, traffic is constantly an issue and that’s where many accidents happen.”

Car crashes peak in New York City between 3 pm and 6 pm; accounting for nearly 14,000 accidents in 2014. Conversely, the best time to commute would be between 3 am and 6 am, when accident frequency is at its lowest.

In the end, many New Yorkers opt to take the subway each day, avoiding traditional vehicle traffic. Even then, the commute can be quite… stuffy.