Home » Blog » Is Your City Safe for Bicycles? 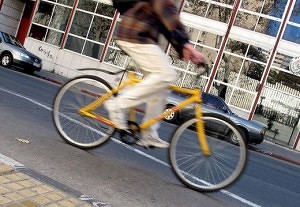 NEW YORK – The popularity of bike-riding is exploding across America and it’s grabbing headlines – both good ones and bad ones. Few places have seen a larger bike boom than New York; but recently, there have been a number of reported crashes involving bicycles, begging the question: is the Big Apple safe for bicycles?

This week, witnesses told a New York news station that a bike rider slammed into a two year-old toddler ‘at a high rate of speed,’ apologized then left.

Last November, a bicycle crash involving U2 frontman Bono grabbed global headlines. The incident happened in Central Park and the award-winning singer had to undergo surgery. Bono had feared he ‘may never play guitar again.’

These are just the incidents that don’t involve vehicles, a Manhattan car accident attorney at Cellino & Barnes said. There are many more incidents each day off the bike paths and on the streets.

“Bicyclists and pedestrians are getting hurt more often in New York,” car accident attorney Ross Cellino said. “Most bicyclists don’t even think of insurance to cover these costs; and when they’re at fault in an accident, it can make an already painful situation worse.”

When comparing monthly statistics, cycling in New York City is more dangerous today than it was just three years ago. Injuries stemming from bike accidents have increased by over 25 percent, reaching nearly 570 incidents last month.

In the same time frame, injuries to pedestrians and motorists have dropped as the city continues to implement its Vision Zero plan.

“Preventing injuries needs community involvement,” Cellino said. “Each person can make slight changes to the way they drive, bike and walk – these slight changes can improve the health and safety of everyone around you.”

Car accident attorneys say motorists should be aware of their surroundings and courteous to bicyclists sharing the road. At the same time, bicyclists must be mindful too. It is often required by law to use roadways, not sidewalks, when operating a bike. Bicyclists are also required to obey the same rules motorists do on the streets.

If everyone takes small steps to improve safety, car accident attorneys hope injuries can be prevented.