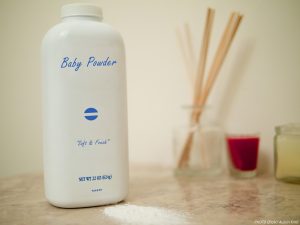 NEW YORK – You may have used a simple silicate mineral for years without knowing it could cause cancer. Silicon, magnesium and oxygen together form talc, which in its powder form is a popular product often used on babies and heavily marketed to women.

The problem is, talc could cause ovarian cancer.

The verdict follows a similar order in February, which awarded an Alabama family $72-million in damages after a woman who used talcum powder as a “bathroom staple for decades.” That woman, Jackie Fox, passed away in October 2015 at the age of 62, more than two years after her diagnosis.

A talcum powder attorney at Cellino & Barnes said thousands of women claim they’ve developed cancer after using talc and many companies have refused to warn consumers about the potential dangers associated with their products.

“For decades, scientists and doctors have urged companies to warn consumers of the risks  but the billion-dollar pharmaceutical giants never did that,” talcum powder lawyer Ross Cellino said. “Instead of warning their customers of the cancer risks, companies heavily marketed talcum powder as a safe product for both babies and women.”

A commercial that aired in 1986 marketed talcum powder as a “soft” product that you’ll “never out-grow.” Another commercial circa 1989 encouraged women to “Baby Yourself with Johnson’s” baby powder.

Manufacturers, including Johnson & Johnson have argued that regulatory reviews “have determined that talc is safe” for cosmetic use and that current labeling practices are adequate.

Several juries have disagreed with that assessment and the lawsuits against Johnson & Johnson are piling-up. More than 1,200 women have pending litigation against Johnson, claiming its talcum powder had devastating effects on their health.

At Fox’s trial, an internal memo from a Johnson & Johnson consultant was submitted as evidence. The memo suggested that the link between talc and ovarian cancer is as obvious as the link between smoking cigarettes and lung cancer; if the company refused to acknowledge the risks, it was “denying the obvious in the face of all evidence to the contrary.”

Johnson eventually eliminated some probable carcinogens like formaldehyde from its baby and personal care products in 2015. However, it took years of petitions and a boycott threat for the company to agree to the change.

In its natural form, talc contains deadly asbestos fibers. If inhaled, natural talc products could cause another cancer, mesothelioma. Talcum products used in American homes have been asbestos-free since the early 1970s but there are still concerns over their safety.

According to a study from Boston’s Brigham and Women’s Hospital, those who regularly used talcum powder for feminine hygiene experienced a higher rate of ovarian cancer – 33-percent higher.

In many cases, doctors have found talc particles inside cancerous ovarian tissue. Talc has also been identified in pelvic lymph nodes, which indicates that it can migrate all the way out of the fallopian tubes and into a woman’s abdomen.

Talcum powder attorneys say big pharma companies have continued to deny the risks despite strong evidence that there is indeed a link between talc and ovarian cancer.

If you or a loved one has been diagnosed with ovarian cancer and you suspect talc was a factor, contact a talcum powder attorney at Cellino & Barnes today for free case evaluation.

For the latest information on talcum powder lawsuits and public safety, visit Cellino & Barnes on Facebook.