Home » Blog » What Is Liability in a Car Accident? Knowing Your Risks on the Road 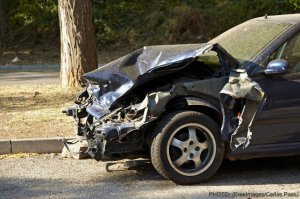 BUFFALO, N.Y. – If you’ve ever been in a car accident, you know how devastating they can be; even when it’s minor. There can be a multitude of unforeseen costs associated with a car crash, many of which can be exacerbated by injuries and stress.

The U.S. Department of Transportation (DOT) estimates there are over 6-million car crashes every year. In each of these accidents, there’s a high risk of someone getting injured. In fact, most injuries occur either at home or in the car.

LIABILITY AS A DRIVER

Almost all car accident happen when at least one driver is careless. Unfortunately, not every crash is so black-and-white.

Legally, negligence is more complicated. In situations where multiple drivers were negligent, it can be determined that one was more at fault than the other.

In New York State, liability is often determined using percentages. This is called comparative negligence. For example, if an injured driver was awarded $100,000 and a jury determined that the driver was 25-percent responsible for the crash and resulting injuries, that driver would be awarded $75,000 – or 25-percent less.

In some states, an injured driver can recover compensation for their injuries in the amount based on the other person’s fault; and it doesn’t matter how negligent your actions were that led to a crash. However, most states are more restrictive, and an injured driver may not be entitled to any compensation if they were more than 50% responsible for a crash.

A FREE consultation with a Buffalo car accident lawyer at Cellino & Barnes could help you evaluate your liability as a driver, based on your specific circumstances.

If you’ve ever rented a vehicle, you were probably forced to consider liability insurance before they give you the keys. Laws regarding rental liability greatly differ from state to state and in some cases, collision damage waivers are not allowed.

There’s also a long list of exclusions that could apply, if you were to obtain insurance for a rental car, including negligent driving, driving on unpaved roads or driving under the influence of alcohol.

Buffalo car accident lawyers also suggest inspecting your rental car before signing for it, as you could be held liable for damages caused by previous users. If it’s not documented, the cost to fix it could fall on you.

It’s important to note that your own car insurance policy may not provide coverage if you’re in an accident while driving a rental car.

In most scenarios, the rental company has done everything possible to shift liability to the driver. If anyone is ever injured in a crash involving a rental car, the company is usually not a party. But there are several exceptions.

Buffalo car accident attorneys say rental companies can be found negligent if their vehicle wasn’t properly maintained, or if they knew about a defect. For example, if the vehicle you were driving had an open recall for defective brakes, and the faulty brakes are determined to be a factor in a crash.

There are many factors in car accidents, and some are never even considered until late in the legal process, but the attorneys at Cellino & Barnes have focused their practice on helping those who have been injured in car crashes – and their experience could help you and your family get the best result possible from a claim. If you have any questions following a crash involving a rental car, contact an attorney for a FREE case evaluation.

These are quickly becoming a preferred way to get around your city, or others while visiting. Most of the taxi and ridesharing companies have insurance policies in place to protect passengers, but these policies are often limited.

While most cities require taxis to have commercial insurance policies, which range between $250,000 and $500,000, ridesharing is not as tightly regulated. However, both Uber and Lyft policies state that the companies will provide up to $1 million in damages if there is an accident.

But there are more concerns passengers should be aware of. The driver (or cab company) also has a responsibility to maintain their vehicles. A report from Cars.com found that as many as 40-percent of taxi cabs had open recalls that haven’t been addressed. An unfixed recall can cause serious problems on the road.

Coverages between ridesharing and taxi cabs can differ from city to city, and the amount an injured passenger is entitled to can be drastically different, depending on the specific string of events that led or contributed to a crash.

In any scenario, injured passengers are urged to obtain a FREE consultation with an experienced personal injury attorney.

All buses and travel coaches are required to be licensed and carry minimum insurance coverage, which can differ in the amount from city to city.

However, the rules differ from state to state and some vehicles may not be considered a ‘bus’ at all, and injured passengers would need to obtain compensation from the driver or the company directly.

Insurance is often complicated and diverse, and unless you are highly trained in insurance matters, obtaining compensation alone can be difficult.

Fortunately, the Buffalo car accident lawyers at Cellino & Barnes have helped thousands of victims get over $2 billion in settlements and verdicts. Their experienced and trial-tested lawyers have handled all types of personal injury cases, and that experience can help you and your family get the best result possible from a claim.

When an accident happens, call Cellino & Barnes for a FREE consultation.