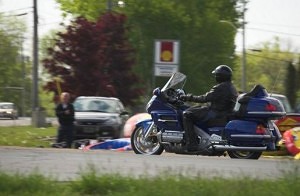 BUFFALO, N.Y. – The trees are growing leaves again and the temperatures are getting toasty. Summer isn’t scheduled to officially start until June 21st but motorcyclists couldn’t wait. Thousands of motorcycles are on the road and safety continues to be top priority in New York State.

The New York Department of Motor Vehicles and the Governor’s Traffic Safety Committee declared May as Motorcycle Safety and Awareness Month, and for a good reason.

In 2013, there were over 5,000 motorcycle crashes in the Empire State alone causing nearly 200 fatalities and many more injuries.

“Automakers have taken steps to make cars safer with sensors and airbags but you don’t have that when you’re riding on two wheels in Buffalo,” motorcycle accident attorney Ross Cellino said. “All a biker could have is their judgement and a helmet.”

The National Highway Traffic Safety Administration (NHTSA) records over 4,000 deadly motorcycle crashes each year, accounting for about 15 percent of all highway fatalities. Motorcycles only represent 3 percent of all vehicle registrations in the United States.

“Everyone needs to work together to ensure the roads are safe for all motorists,” Cellino said. “Motorcyclists must be responsible; follow the traffic laws, make yourself visible and avoid bad weather and drivers have the same responsibilities.”

Buffalo motorcycle accident attorneys at Cellino & Barnes say drivers should always check their blind spots before changing lanes. Since motorcycles are smaller, they can often be obscured when traveling next to a larger vehicle.