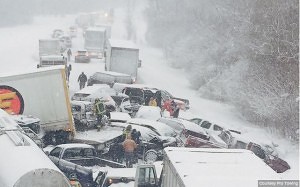 NEW YORK – Drivers have had enough of the snow and ice for one season but the Empire State continues to get slammed by winter storms and the costs are adding up.

State and local agencies are already on pace to spend more than $2 billion battling snow and ice on the roads. Delays are costing trucking companies anywhere between $2 billion and $4 billion and insurance companies are estimated to fork out nearly $1 billion in losses due to winter weather.

New York State Police shut down Interstate 81 last week north of Syracuse due to an enormous pileup of more than 30 cars and trucks. One driver took a video to Facebook following the crash. 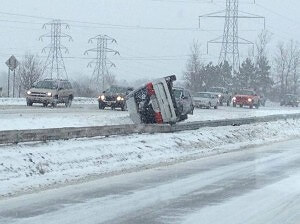 “I’m alright, I got a little scratch on my finger but that’s it,” Ian Wagner said in the video.

In Buffalo, more crashes caused delays on highways and surface streets. One man, driving on I-290, took photos of a jackknifed tractor trailer that blocked several lanes of traffic and an SUV that rolled over into the median.

In New York and across the Hudson River valley, snow and icy conditions were responsible for dozens of car accidents, including one that took out a Long Island power pole.

“It’s a war zone in this weather,” Cellino said. “You can be the safest driver in the world but when the snow hits the pavement, it’s suddenly a different world.”

Buffalo car accident lawyers suggest staying off the roads, if possible. If travel can’t be avoided, drivers are urged to drive slowly and carefully, leaving enough time to make it to their destination safely.