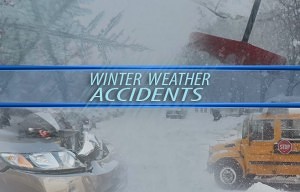 NEW YORK – A slushy and snowy commute troubled drivers across northeastern roadways. In some places, the winter weather caused dangerous and deadly car accidents or slippery situations on the sidewalks.

Monday afternoon, Interstate 95 was closed in Rye, N.Y. due to crashes that killed two people. According to New York State Police, the first car crash was minor but while the drivers were exchanging insurance information outside their vehicles, a third car lost control and struck the two drivers.

In Buffalo, a man was hit by an oncoming car while retrieving a snow blower that fell out of his truck bed, according to The Buffalo News. The News said the man was treated for a forehead cut.

The slushy roads may have also played a role in an accident that caused a garbage truck to overturn in Brooklyn. According to CBS New York, the truck fell on its side and injured one person. 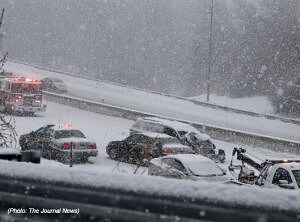 Several vehicles collided on Interstate 287 in New Jersey. According to crash investigators, every driver was able to pull off the highway but authorities did close an exit ramp nearby.

Across the metro area, commuters were bogged down by delays and pedestrians battled heavy crowds and slippery sidewalks. In some areas of New York, it became even more dangerous when manhole covers blew off, seriously injuring a 71-year-old man on Monday.

“Roadways and sidewalks always have their risks but the dangers increase tenfold when there’s snow and ice. That’s why there are laws requiring homeowners and businesses to clear those areas of debris in New York,” car accident lawyer, Steve Barnes said.

Many public schools remained open in the city but elsewhere across the state and in New Jersey, school officials made the decision to delay or close as the winter weather advisory was extended.