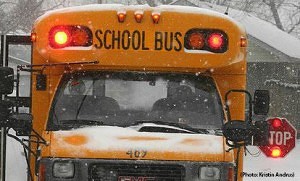 BUFFALO, N.Y. – State Police said a student was dragged for nearly a half mile after her backpack was snagged in the bus doors Tuesday afternoon.

The incident marks the third time in the past month a student was hurt getting off the school bus. According to the Associated Press, the first two happened in Madison County in late December resulting in one bus driver’s resignation.

“Incidents like this happen way too often around buses,” Buffalo personal injury attorney, Ross Cellino said. “It’s important that both parents and bus drivers pay close attention and watch for loose articles of clothing that can get caught or snagged.”

The accidents aren’t just happening off the bus; earlier in January, police said a school bus driver suffered a heart attack before crashing into another school bus in Rochester.

The driver of the first bus died at the scene while the other driver and eight students were injured.

“These accidents are happening across the country,” the Buffalo car accident lawyer said.

In Louisiana, a 14 year-old was killed crossing the street, hit by an out of control vehicle.

In Michigan, a 15 year-old was struck as he ran toward his approaching school bus.

“It is with deep sadness that I communicate to you that Lucas Vansprange, ninth grader at Central High School has passed away. Lucas was struck by a vehicle on Cascade Road this morning around 7:00 a.m.,” school administrators said in a letter sent to parents.

Statistics put together by the National Highway and Traffic Safety Administration show the majority of accidents happen in the mid-afternoon and involve more than one vehicle.

Although statistics show bus travel remains one of the safest modes of transportation, the number of bus accidents has disturbingly been increasing since 2003.