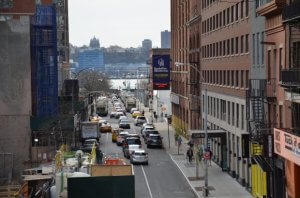 NEW YORK – After two years of the city’s Vision Zero plan, there’s good news coming from Mayor DiBlasio’s office. At the end of 2015, traffic fatalities in the Big Apple were at their lowest levels since 1910, the Mayor’s Management Report stated.

The annual report aims to show progress or areas of concern in regards to the administration’s plans for public safety, education and healthcare. For the most part, the report highlights great strides: Traffic fatalities were cut by over 5-percent in the last year. Passenger, motorcyclist and pedestrian fatalities also dropped over the last 12 months.

However, it’s not all good news in Gotham.

Driver fatalities were up by over 17-percent and cyclist deaths increased 25-percent over the last year. The two statistics are concerning, a Manhattan car accident lawyer at Cellino & Barnes said.

“More drivers are getting hurt in car crashes and more bicyclists are getting struck by cars and many of these accidents can be traced back to distractions in Manhattan,” car accident attorney Steve Barnes said. “Distracted drivers are a problem everywhere, not just in the city, and almost everyone knows that distracted driving is a serious issue but they do it anyhow.”

Cellino & Barnes research has found that distractions are a factor in more than half of the car crashes that inflict serious injuries to one or more parties.

The city currently has plans to redesign 93 left-turn intersections this fall.

“Intersections are a dangerous place for both drivers and pedestrians,” Barnes said. “When we look at a case, we don’t just look at the crash and who’s responsible – our car accident lawyers also examine the infrastructure and possible flaws in the street that may have contributed to a crash and many times the results of our investigation can improve the value of our client’s case.”

Cyclists in particular are concerned with the MMR’s findings. Cycling fatalities have consistently been rising since 2014.

Over the past 12 months, 20 bicyclists were killed on New York City streets. Many of the accidents occurred on streets without protected bike lanes, which have been proven to make the roads safer for bicyclists.

Currently, only a portion of New York City streets support protected bike lanes. Although the city is making an effort to create more lanes for bicyclists, a Manhattan bicycle accident lawyer at Cellino & Barnes says infrastructure improvements still may not be enough.

“Drivers can sometimes be in their own zone, solely focusing on motor vehicle traffic and we know there’s plenty of that in Manhattan,” bike accident lawyer Ross Cellino said. “Again, we see that many of these accidents occur at or near intersections and the driver can often be held liable for a cyclist’s injuries.”

Manhattan bike accident attorneys say operators of motor vehicles are usually obligated to yield to pedestrians and bicyclists in a manner that is consistent with the rules of crosswalks and streets.

If you or a loved one has been struck by a negligent driver, Cellino & Barnes has helped New Yorkers for over 50 years. With offices in Midtown, their Manhattan car accident lawyers and Manhattan bike accident attorneys can help you obtain the best result possible. Contact Cellino & Barnes today for a free consultation.