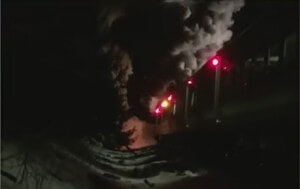 NEW YORK – A Metro North train carrying hundreds of passengers struck a car just north of the train station, according to first responders. The crash resulted in seven deaths and more than a dozen injuries.

Images from MSNBC showed the aftermath of the crash, including a fiery explosion that engulfed the train and the car in Valhalla, N.Y.

More than a dozen investigators from the National Transportation Safety Board and other agencies will determine what caused the crash.

The gates came down on top of the vehicle, which was stopped on the tracks,” Aaron Donovan, a spokesman for the Metropolitan Transportation Authority, said in a statement. “The driver got out to look at the rear of the car, then she got back in and drove forward and was struck.” 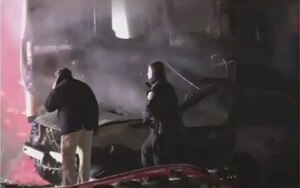 At the scene late Tuesday, Gov. Andrew Cuomo called the scene a “truly ugly and brutal sight.” Cuomo said the maximum speed for the train in the area of the crash was 60 miles per hour but authorities have not officially determined how fast the train was moving.

According to authorities on scene, at least 15 people were hospitalized for mild to severe injuries.