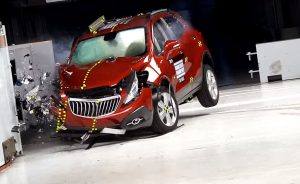 BUFFALO, N.Y. – Face it, cars were designed for drivers. Yes, most seats are equipped with seat belts and air bags to protect everyone in the car but, as the Insurance Institute for Highway Safety discovered, passengers aren’t always protected.

The IIHS is known for conducting and rating vehicles for their performances in crash tests. Most of these tests strap a dummy in the driver’s seat but recently, the Institute questioned how safe vehicles were for passengers.

Not too safe at all, researchers found.

A Buffalo car accident attorney at Cellino & Barnes says passengers run a high risk of injury in car crashes and there’s little they can do to prevent one.

The Institute sent seven small SUVs on a collision course at 40 miles per hour. Each of the vehicles had ‘good’ ratings when they crashed into a barrier on the driver-side but passenger-side impacts told a different story.

Of the seven vehicles, only one scored a ‘good’ rating: the 2016 Hyundai Tucson. The remaining six SUVs ranged between ‘poor’ to ‘acceptable’ grades.

The findings were so unexpected that the IIHS is considering making passenger-side crash tests standard criteria as part of its TOP SAFETY PICK selection.

“Passenger safety is an important but sometimes overlooked aspect when automakers develop vehicles,” Barnes said. “Thousands of passengers are killed in crashes every year and if there are ways to minimize the severity of their injuries, it’s something that should be looked at.”

The Buffalo car accident lawyers at Cellino & Barnes have helped thousands of passengers recover the maximum compensation available after a crash. If you’ve been injured in a car crash, Barnes says passengers are most often innocent parties and you may be entitled to significant compensation.

Here’s more information on the IIHS small-overlap crash tests and the full ratings of the vehicles tested.