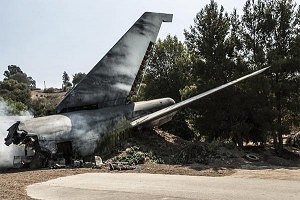 As one of the largest personal injury law firms in New York State, we have the power and resources necessary to take on an airline company. Cellino & Barnes’ plane crash lawyers have experience working with some of the best experts in the country regarding airplane accidents. In addition, we have resolved regional and national air crash cases and are currently working with international aircraft disaster victims.

We have two airplane accident lawyers who are licensed pilots. Their experience and knowledge of proper flight requirements greatly enhance our position.

It is our sincere wish that these types of incidents never happen, but when they do, Cellino & Barnes is here to help you and supply you with a lawyer for airplane accident legal advice.

If a loved one has been involved in an airplane accident and you don’t know what to do, or you have a question that has not been answered, call us now at (800) 888-8888 or contact us.

It is the responsibility of the commercial airlines, aircraft manufacturers, airport operators, and their contractors to ensure your flight is safe.  Each is required to follow regulations, which are enforced by the Federal Aviation Administration in the United States.  When any of these parties fail to fulfill their obligations, passenger safety is at risk.

Although flying in a commercial plane is four times safer than riding in a car, small single-engine planes or charter planes have an accident rate 7 times higher than autos and the death rate is also higher.

There are many reasons why single engine or charter plane’s crash, however, pilot error and weather conditions are the primary reasons.

Below we’ve listed a few online resources that can provide you with information, counseling, and support. There are many groups and organizations willing to reach out and give assistance to plane crash victims and their families.

Our Attorneys are Pilots

Both Mr. Barnes and Mr. Goldstein, along with attorney Robert J. Schreck have represented individuals in aviation disasters ranging from single-engine small aircraft to large commercial airlines. Robert Schreck recently resolved a wrongful death claim, less than two years from the date of the crash.

Additionally, we have a team of 33 attorneys on staff. With their combined experience in one of New York’s largest personal injury law firms, we have the power and resources necessary to take on an airline corporation.

At Cellino & Barnes, our goal is to provide you with exceptional legal services. We will work hard to ensure you receive the highest standard of excellence.

Each year men and woman in our military are killed in helicopter crashes. Although the majority of these crashes occur during combat, some have occurred due to mechanical defects.

Because helicopters are very complex machines, they require the highest level of operational and mechanical skill. When these skills are compromised, accidents happen.

Helicopters are also used to transport those critically injured from remote accident scenes, used for law enforcement, sightseeing, and recreation.

Plane crashes are caused by many factors, including product defects, improper maintenance, and pilot error. Airplanes are designed and built to stay in the air. They are supposed to be properly checked and maintained at all times but unfortunately, this is not always the case.

The following are common causes of serious plane crashes:

Investigating a plane crash claim takes experience and is very costly. Our plane crash attorneys are experienced in handling complex plane crash cases and we have the resources to handle these costly cases.

An Afriqiyah Airways jet lost control and crashed violently as it attempted to land at the Tripoli International Airport in Libya.

As a result of this plane crash, 92 passengers and 11 crew members were killed.  There was one survivor, a young boy from the Netherlands.

Cellino & Barnes is accepting cases related to this plane crash.

What is a runway incursion?

A runway incursion is an incident at an airport, which involves an aircraft, vehicle, person or object on the ground that creates a hazard either when the plane is taking off or landing.

Unfortunately, because all plane crashes are different, the agencies involved in the investigations vary. Depending on the circumstances, one or more of the following agencies will be involved, National Transportation Safety Board, Federal Aviation Administration, Transportation Security Administration and the Federal Bureau of Investigation. If an accident happens on foreign soil, the Department of Justice, Department of State or Defense Department may be called. If the plane crash involves a military aircraft, the Military Safety Mishap Board will be called.

What is a Wrongful Death Claim?

A wrongful death claim is brought against an airline when your loved one was killed as a result of the airline’s negligence. An airline can be sued for pain and suffering, mental anguish loss of consortium and future wage loss.

Who Can Be Sued?

An airplane manufacturer may be sued for defects in a plane’s design, assembly of the plane, their choice of materials, testing procedures and more.

The FAA is responsible for monitoring the airplane while in flight. If there is a breach in their duties, there may be a valid claim for damages. Likewise, air traffic controllers have been known to be negligent and thus, the government can be held liable for the error of their controllers.