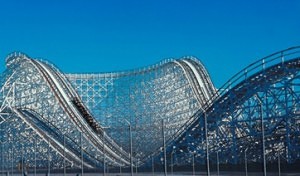 As roller coaster attorneys, we have proven success in representing injured clients due to the negligence of amusement parks.

Michael Dwaileebe v. Six Flags Darien Lake – A gentleman was ejected out of a Superman roller coaster (now known as the Ride of Steel roller coaster) and flew approximately ten feet in the air before landing on pavement.

Following a six-week trial, a jury deliberated for three days before finding Six Flags Darien Lake 100% liable for the May 16, 1999 accident on its Superman roller coaster.

Six Flags argued that Dwaileebe fell as the ride came to a stop because he was too large for the ride’s lap-restraint bar to be pushed down. They claimed he should have known that he was too large to ride. Following Dwaileebe’s accident, park officials later added safety belts to the ride.

Following several motions made after the jury verdict, the case ultimately settled for $2.85 million.

During the course of the trial, the offer to settle was never greater than $250,000.