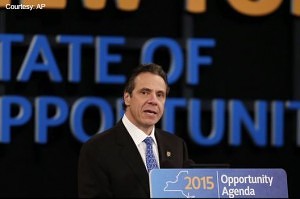 At his state of the state address on Tuesday, Cuomo asked lawmakers to budget more than $50 million to help battle weather emergencies.

A November storm that dumped 70 inches of snow on Western New York also caused motorists to be stranded, roof collapses, flooding, and at least a dozen deaths.

“In the case of a weather emergency, we need the right equipment,” Cuomo said.

Cuomo is calling for a new fleet of snowplows equipped with GPS to clear highways of snow and ice quicker and more effectively.

Several assemblymen and state senators have already drafted dozens of bills that would improve public safety on the roads. More than 100 bills would retune motor vehicle laws, if passed.

A handful of bills, drafted by assemblymen and senators from New York City and Long Island, would outlaw any significant accumulation of snow and ice on cars operating on public roadways due to risk of injury or car accidents.

“No person shall operate a motor vehicle on a public street or highway while there is an accumulation of snow, sleet, or hail on the roof or cargo bed surfaces…” Assembly Bill 1862 states, “in excess of three inches.”

In the wake of these winter disasters, Cuomo is also requesting new laws that would require all emergency responders to be retrained.

“We want to be training all local personnel on the same protocols,” Cuomo said. “We need to [coordinate] in Albany.”

Several motorists died, stranded in their vehicles during November’s snow event. The governor hopes his new public safety plan, part of a $142 billion budget, will help save lives in the event of another storm.