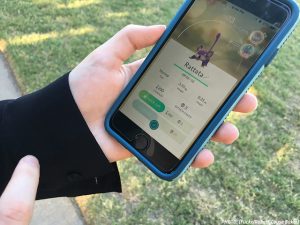 NEW YORK – You probably have the app on your phone even though it has only been around for a week. Pokémon Go is already the most popular app on Android and iOS and it will soon have more daily users than Twitter. Although it’s just a game, we’re already seeing some real-world affects.

The new augmented reality game uses GPS to send players on an adventure through their cities, towns and countrysides on a quest to find Pokémon – creatures created by the popular Nintendo games in the 1990’s.

The game encourages players to get outside and visit local landmarks or historical markers to restock on valuable in-game items; but a New York slip and fall lawyer at Cellino & Barnes says exploration is often paired with risk.

“Players have their eyes locked on their smartphones and we’ve already seen tragic incidents occur since the game was released in New York,” slip and fall attorney Ross Cellino said. “People are suffering real-world injuries simply walking down the sidewalk because they’re so fixated on the game.”

One person claimed on Reddit that they slipped and fell down a ditch, leaving them with a 6-8 week recovery period. Other reports suggest the handheld game played a factor in car crashes and other accidents.

The game has also been linked to violent crime, in at least one case. According to the O’Fallon Police Department in Missouri, robbery suspects the app’s geolocation feature to target and lure players into a secluded trap. The suspects were later apprehended by police officers but only after nearly a dozen teenagers were robbed.

Other incidents can be startling. For example, a Wyoming teen stumbled across a dead body near the banks of the Big Wind River.

“I was trying to get a water Pokémon,” the teen told CNN.

With the game’s popularity reaching new highs every day, the New York slip and fall lawyers at Cellino & Barnes urge players to use caution – both inside and outside their vehicles.

“No one should be playing any type of distracting game while behind the wheel but even outside the car, there’s a real risk of danger,” Cellino said. “We see these all the time; uneven sidewalks, slippery floors and stairways – they’re already dangerous areas but they’re even more hazardous when a person is not paying attention to where they are going.”

Some aspects of reality games can be beneficial: they promote physical activity and can create social connections but the safety aspect is often neglected.

Cellino & Barnes has offices across New York State, including three in the Greater New York Metro Area. For office locations and more information about our New York slip and fall lawyers, find us on LinkedIn.