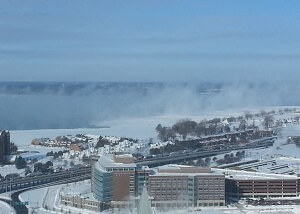 BUFFALO, N.Y. – The week began by breaking a 111-year-old record for coldest temperature in Western New York. The -10 degree reading taken at the Buffalo-Niagara International airport set a new record, breaking the previous record of -8 set in 1904.

Colder temperatures were recorded outside of Buffalo. In Dunkirk, New York, it hit minus 27. One of the coldest temperatures in the state hit negative 36 in Watertown.

Power outages affected hundreds of homes in Southern Erie County and dozens of car accidents were reported throughout the day on Monday.

“Water can freeze within minutes,” Cellino said. “These temperatures can sometimes turn a regular city street into a bowling alley for your morning commute.”

Car batteries are often a struggle for drivers in subzero temperatures. Over the weekend, AAA reported drivers were facing up to a 12 hour wait for services in Western New York due to the demand for help.

The best option for drivers is to stay inside during the arctic chill. However if you must leave the house, provide yourself ample time in case of a dead battery, traffic backups and always use caution on the roadways.