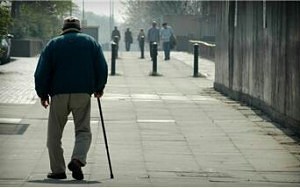 NEW YORK – Millions of Americans use public sidewalks as a safe way to get where they’re going every day but according to a recent New York Times blog, millions more dramatically increase their risk of a pedestrian accident injury.

Those 65 and older make up 13 percent of the population but account for about 20 percent of pedestrian deaths, according to a recent AARP study.

The Times writes not only are older adults at the mercy of cars and trucks on the road while using footpaths, the curbs themselves can be dangerous and even deadly for them.

Many of the accidents involving elderly pedestrians don’t just involve motor vehicles but bicyclists, sidewalk obstructions (snow and ice), and poor street designs are also cited as attributing factors to the spike of injuries in the pedestrian population.

Just this week, an elderly man was critically injured while he was crossing the street in Cheltenham Township, Penn.

Another 86 year old was struck in Morton Grove, Ill.

And an 84 year old Geneseo, NY woman was injured while getting her mail.

Those are just a few of the accidents involving elderly pedestrians. Since most roadways are unlikely to change anytime soon, experts suggest both drivers and pedestrians heighten their awareness while on the roads and the sidewalks.