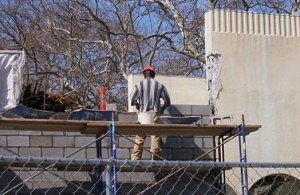 BUFFALO, N.Y. – Workers across the nation are enjoying a construction boom and some areas like Western New York are seeing great benefits. However, there are extreme safety concerns.

WNYCOSH members also concluded that federal investigators don’t conduct enough safety inspections in the Buffalo-area. A construction accident attorney at Cellino & Barnes says the findings are concerning and many workers could get hurt without the proper safety protocols.

“Too often, we see a company cut corners and compromise worker safety so it can meet deadlines or boost profits in Buffalo,” construction accident attorney Steve Barnes said. “When safety guidelines aren’t followed, a construction injury can be costly and devastating to workers and their families.”

There were thousands of construction permits issued in Western New York in 2014 and according to the WNYCOSH report, OSHA only conducted 288 inspections that year. That’s roughly one inspection per weekday in an area that covers ten counties, including two heavily populated metropolitan markets (Buffalo and Rochester).

Of OSHA’s inspections, the report found that 86 percent of all violations were classified as “serious,” “repeat” or “willful.”

“Safety violations should be unacceptable on construction sites but every day workers are risking their health and sometimes their lives,” Barnes said. “It is time for constructions businesses to put safety above the bottom line.”

The report stated it focused its research on construction falls because the construction industry and its insurance companies are currently backing legislation that would weaken New York State’s Scaffold Safety Law, which holds owners and contractors liable for many types of injuries.

The proposed changes would allow employers to take more safety shortcuts and the risk of worker falls would likely go up.

WNYCOSH members hope the findings can improve safety and raise the penalties for construction companies slapped with violations. Currently, the average penalty costs only $1,963 and WNYCOSH argues it is “too little to effectively deter construction employers from taking safety shortcuts.”

Many workers who have been injured on a construction site may need an advocate who will protect their rights and help them receive fair compensation. For over 50 years, the Buffalo construction accident attorneys at Cellino & Barnes have helped workers get the best results possible. Click here to learn more about construction injuries and how one of our legal advocates can help.