Home » Blog » Saving Ourselves From Our Pokemon (and Smartphone) Addiction 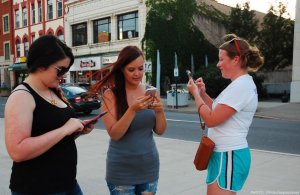 NEW YORK – A Pokemon a day will not keep the doctor away. In fact, the American Academy of Orthopaedic Surgeons (AAOS) issued a warning to phone users everywhere: heads up!

Spurred-on by the popularity of the new mobile game, the warning is meant to grab the attention of everyone who uses a smartphone. After all, a Brooklyn car accident lawyer at Cellino & Barnes says smartphone users have been getting hurt long before they could catch monsters on an app.

“Distracted walking has been a major problem for years in Brooklyn,” car accident lawyer Steve Barnes said. “Smartphones are so distracting that some pedestrians didn’t even look up before crossing a street and there have been many accidents.”

In a statement, the orthopedic surgeon and AAOS spokesperson, Alan S. Hilibrand, said doctors are urging gamers and smartphone users to be mindful of their surroundings. Hilibrand said walking while looking at a phone can result in serious injuries including sprains, broken bones or even death.

“We love that these games a bringing children and adults outdoors and encouraging exercise,” Hilibrand said. “But we also want everyone to be mindful of their surroundings as they enjoy this activity.”

According to a recent AAOS study, nearly four out of 10 Americans have witnessed a distracted walking incident and roughly 25 percent have had a close-encounter themselves.

Most Americans already believe distracted walking is a ‘serious’ issue but usually, the blame is placed on others, with 76 percent saying “other people” are walking distracted, the survey found. That leaves safety advocates with a conundrum: clearly, the phone is distracting – so distracting you may not even realize you’re distracted.

“All it takes is a split second for things to go wrong and pedestrians are most vulnerable,” Barnes said. “Although some smartphone apps encourage exercise and healthy lifestyles, it’s just as important to look up and notice the world around you – at the very least, it could prevent a serious accident.”

The AAOS also listed some tips to stay injury free when walking with or without your smartphone” including:

“Drivers can get just as distracted as pedestrians but they have the added responsibility of operating a motor vehicle,” Barnes said. “You truly have to be defensive and ready for anything to happen but you can’t do that when your eyes are locked on your smartphone.”

If you’ve been struck by a vehicle, dozens of our clients have recommended others to call our Brooklyn car accident lawyers. Contact Us today for a free consultation.