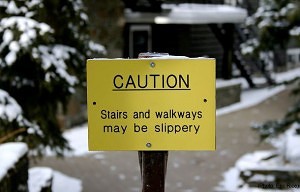 NEW YORK – After any big winter storm, the snow and ice piles up and it’s the responsibility of homeowners and businesses to keep walkways clear of slippery patches, potholes and anything else that would obstruct your path.

In most areas, shoveling, salting and repairing isn’t just the courteous thing to do, it’s the law.

“Homeowners and businesses can get reported and fined,” Slip and Fall attorney, Steve Barnes said. “Unfortunately, thousands of people are hospitalized every year because someone didn’t clear a path for them.”

These accidents aren’t just happening outside in the elements but liability extends inside homes and businesses as well.

Just recently, a Louisiana woman sued a grocery store chain because she slipped on an “unknown substance” spilled in one of the aisles. Although the case doesn’t specify an amount, the woman is asking to recover medical costs, loss of wages, pain and suffering, mental anguish, and distress.

“Many times, there’s a buildup of slippery snow, ice and slush as you walk into your neighborhood stores,” Barnes said. “They’re usually responsible for cleaning that up before someone gets hurt.”

In just one year, medical costs of falls added up to $30 billion.

According to the Centers for Disease Control and Prevention (CDC), more than 2.5 million people were treated in emergency rooms after a slip and fall with a third of those accidents resulting in further hospitalization.