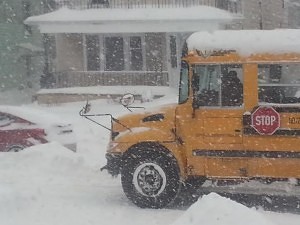 In many places, the storm was worse than expected and some school districts were caught off guard. Several schools in Western New York remained open despite having six inches to a foot of snow and blowing wind. Buffalo Public Schools’ Transportation Director, Al Diamico told WKBW-TV the morning commute was messier than anticipated.

“If we had a crystal ball, now that we know what’s happened, we definitely would’ve closed down,” Diamico said.

According to WKBW-TV, the decision to have classes Monday had several parents asking, “how long do our children wait for the buses outside?”

For the most part, businesses stayed open but very slow due to the snow-covered roads, which were hazardous for drivers and people outside their cars, trying to dig out. 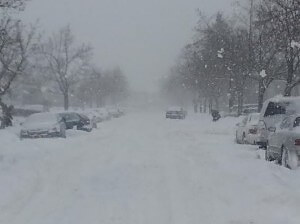 “This street was not been plowed all night,” one Buffalo resident said. “Cars and trucks just zoom by, packing the snow down even more, I can’t shovel out because of that.”

The same storm is responsible for dozens of injuries across the country. In Ohio, a Toledo police officer died while shoveling snow in his driveway and the city’s 70-year-old mayor was hospitalized after an accident while he was out checking road conditions.

“All types of accidents spike during winter weather conditions. We see everything from car crashes to slip and fall accidents and even medical accidents in Buffalo,” car accident lawyer Ross Cellino said.

Statistics show the risk of a heart attack greatly increases during cold weather and the risk of a car accident can increase by over 20 percent.