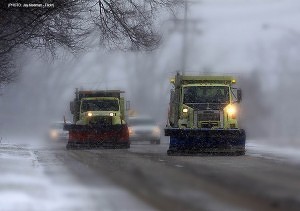 ROCHESTER, N.Y. – The snow continues to accumulate across Western and Central New York with another three to seven inches expected through the workweek. Snowplows are already working overtime, salting roadways to prevent ice from forming.

The plows keep roads clear in the worst conditions, a necessary safety precaution for any major city. However, plows can also be very dangerous.

“These are giant vehicles made specifically for clearing snow in places like Rochester,” car accident lawyer Ross Cellino said. “Unfortunately, if there’s an accident involving a car and a snowplow, the car usually doesn’t stand much of a chance.”

On Wednesday, a woman riding her bike in Virginia was struck and killed by a snowplow. The crash was ruled ‘weather-related’ and remains under investigation.

“Whenever you’re around a large truck, it’s good practice to give them space,” Cellino said. “The bigger the vehicle, the larger the blind spots and weather is sometimes a factor as well.”

Snowplows are often pushing thousands of pounds of snow in windy storms, which can create a white-out effect. The snow removal keeps the roads in a safer condition for drivers but car accident attorneys say drivers always need to be careful around plows.