Home » Blog » Snowstorm A Factor in Dozens of Accidents 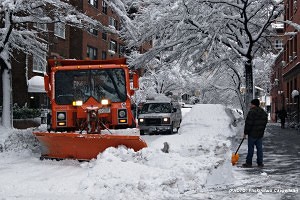 NEW YORK – A massive snowstorm crushed the east coast with a coat of snow last weekend. It caused dozens of accidents resulting in several injuries and nearly 40 deaths.

Many areas across the coast, including New York City, imposed travel bans as crews began removing up to 3 feet of snow. Despite the warnings and travel bans, some drivers took a huge risk by taking their cars and trucks onto the roadways – and some of these cars made the weekend very dangerous.

A New York car accident attorney at Cellino & Barnes says the sudden winter weather played a major role in many accidents but most of them could have been prevented.

“Many people suffer heart attacks while shoveling snow and there’s a higher risk of carbon monoxide poisoning when there’s a snowstorm like this in New York,” car accident attorney Ross Cellino said. “Unfortunately, there were many car crashes too – and these accidents could’ve been preventing by staying home.”

In Washington, an 82-year-old man went into cardiac arrest and died while shoveling snow in front of his home.

In Kentuhttps://www.fox5dc.com/news/local-news/82-year-old-man-dies-while-shoveling-snow-in-dccky, police said a car crashed into a salt truck, killing one driver and injuring several others.

In Pennsylvania, a pregnant teenager was shoveling snow when she suffered from ‘several heart defects.’ A family member told NBC Philadelphia, “I told her it probably wasn’t a good idea for her to be outside shoveling.”

On Long Island, a 66-year-old man was standing in front of his home when a private snow plow struck him. According to PIX11, he was rushed to North Shore Syosset Hospital where he was pronounced dead.

In New York City, at least three more people died while shoveling snow, according to the New York Police Department.

Several others were found in their vehicles and treated for carbon monoxide poisoning; their tailpipes were found to be clogged with snow and ice.

“Everyone has somewhere to be but it’s not worth your health or the safety of others,” Cellino said. “Whenever there’s snow, it’s important to be prepared and to do everything safely and cautiously.”

When the travel ban was lifted in the city, the problems continued. Monday morning’s commute had cars moving along highways at speeds in the single digits and some streets were still packed with snow.

New York car accident attorneys say the slippery roads created dangerous conditions but in most cases, drivers have a responsibility to adjust to these conditions. If you’ve been injured by a negligent driver, a car crash attorney at Cellino & Barnes can provide a detailed case evaluation for free. Contact Us now to speak directly with a personal injury lawyer.