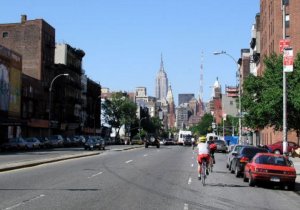 NEW YORK – There are so many ways you can commute to work today: walk, car, bus, train, bicycle… it’s a long list! But one thing New Yorkers have yet to master is how to share the road.

Bicycle commuting has surged recently. Since 2005, the number of people commuting on bicycles has jumped 46 percent or more, according to the League of American Bicyclists. That means there’s more competition for street space.

“It takes cooperation from both drivers and cyclists to make the streets safer in Queens,” car accident lawyer Ross Cellino said. “Unfortunately, bicyclists are almost defenseless against vehicles and drivers can be held responsible if an accident does occur.”

In New York and across the country, there’s a disconnect between cyclists and drivers. According to recent road-usage studies, many drivers don’t use bikes and some don’t even own one.

Psychological studies done through the Department of Sociology at the University of Hawaii on the interactions between cyclists and drivers found that many motorists believe the streets belong to cars (or vehicle traffic in general). So, when an incident does occur, it can often spark a fuse, leading to road rage.

“Road rage is one of the most dangerous attitudes a driver can have,” Cellino said. “Every year, there are thousands of injuries caused by road raging drivers and in some cases, a driver can even face jail time as a result.”

Conversely, bicyclists can be pushed to the brink as well but for different reasons. Bicyclists are extremely vulnerable in comparison to their motoring counterparts. Many bicyclists have driven vehicles before and they know mistakes can happen but when they’re on a bicycle they also know that just one mistake could put their health and safety at risk.

Psychologists studying this delicate road relationship found that bicyclists can sometimes commit road rage when they feel a driver has threatened their safety or the safety of others.

A Queens car accident lawyer says both drivers and bicyclists have to keep cool in these situations.

“Cities are in process of changing road designs and infrastructure to avoid disagreements between bicyclists and drivers but until those changes are complete, and even after they are complete, everyone needs to understand that the streets are multi-purpose and they’re meant to be shared,” Cellino said.

As proud supporters of the cyclists nationwide, Cellino & Barnes urges everyone to use caution on city streets to avoid a potentially serious accident. But if an accident does occur, the firm’s experienced Queens car accident lawyers will aggressively fight to get the best result possible for an injured bicyclist.

If you’ve been hurt by a car or truck, contact a Queens car accident attorney today for a free case evaluation.