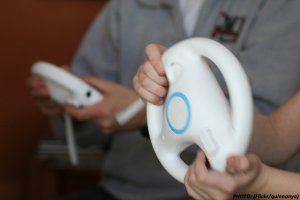 ROCHESTER, N.Y. – If you spent the majority of your childhood (or adulthood) playing Nintendo’s Mario Kart games, you may have received an important life lesson in driving.

Although the real-world streets are less crowded with green turtle shells or banana hazards, a new study found that certain video games (like Mario Kart) could indeed make you a better driver.

The study put 80 college students through several experiments involving different video games. Some of these games were considered ‘action-based’ and required the player to respond and interact with the game, like Mario Kart or first-person shooters. Others were required to play ‘non-action’ video games like The Sims or Rollercoaster Tycoon, where the player has almost complete control of the environment.

In one experiment, players of ‘action-based’ games significantly improved their visuomotor-control skills. In contrast, the ‘non-action’ players didn’t show any development in that category.

A Rochester car accident lawyer says visual and motor skills are important qualities for drivers to have, as they could help avoid a crash.

“Almost every collision can be attributed to human error and better decisions behind the wheel can make the roads safer in Rochester,” car accident lawyer Ross Cellino said. “Good eye-sight and reaction times can give drivers crucial seconds they need to make the right decisions and potentially avoid a dangerous situation.”

Using a driving simulation, researchers put players through a variety of tests. In three different trials, players were asked to steer a virtual car down a lane, straying as little as possible from the center. Sounds easy, right?

The players not only had to keep the car between the lines; they also had to compensate for crosswinds that could affect the virtual vehicle’s direction. The tests found that in-game experience mattered. Those who had been playing action games for more than five hours per week had significantly better reaction times and vision.

Rochester car accident lawyers say those visuomotor skills are extremely important when operating motor vehicles. The attorneys say they often handle cases involving drivers whose visual acuity and motor skills were severely diminished in the moments before a crash.

“Drunk drivers are particularly dangerous because of the way alcohol affects vision and reaction times,” Cellino said. “We urge anyone who has been drinking to call a cab because they’re not only putting their lives at risk – they’re risking the lives of everyone else who uses the roadways.”

Study authors determined that playing action-based games could benefit both experienced drivers and those who have never been behind the wheel of a car. In fact, only a portion of the students studied had a driver’s license.

According to their research, ‘action-based’ games can help people become better defensive drivers since the games require players to constantly make predictions and reevaluate those predictions on the fly, thus polishing the body’s motor skills.

Although you may have mastered Mario Kart, Rochester car accident attorneys urge everyone to use proper judgement when operating a real car. This includes reducing the number of distractions around the driver and keeping alcohol content below the legal limit.

There’s no excuse for driving drunk. If you’ve been injured by a drunk driver, you could be entitled to significant compensation. Contact Us now for a free consultation or Like Cellino & Barnes of Facebook to learn more about how our law firm is promoting safety and smart driving in our communities.