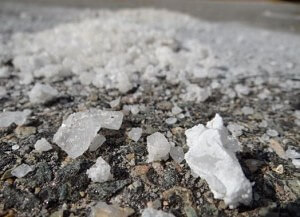 NEW YORK – A simple ionic compound can keep roads clear of snow and ice but at the same time, it’s taxing to vehicles, the environment and transportation authorities. Sodium chloride has hundreds of uses but one major application is de-icing and anti-icing roads with the use of road salt.

On average, a mid-size city in the northeast will spend approximately $1.5 million on salt every year, often buying over 30,000 tons of road salt for one winter season.

For larger areas like New York City, it’s a good deal. Impassible streets can cost the Big Apple up to $700 million, according to the American Highway Users Alliance .

“Road salt can reduce car crashes and injuries by up to 85 percent in New York,” car accident lawyer Steve Barnes said. “Without salt, accident costs around the state could be astronomically high.”

State and local governments will spend about $2.3 billion battling snow and ice this winter but there are several drawbacks. Not only is road salt an expensive venture; it’s also taxing on the environment and the people it’s used to protect.

“Salt can be a car killer,” Barnes said. “Auto manufacturers already have several open recalls on vehicles for salt-related issues.”

According to Nissan North America, road salt could make your vehicle a potential fire hazard. The car company recalled nearly 650,000 vehicles because “a mixture of snow, water and salt can cause an electric short to occur,” leading to connector damage and it could cause “a thermal incident.”

Other car makers reported salt was the main cause behind corroded wiring. Last year, Subaru recalled 670,000 cars due to salt-related issues which may have contributed to ineffective brake lines.

“If something doesn’t seem right with your car, get it checked out,” Barnes said. “Especially in the winter, the salt can do a lot of damage to your vehicle and make driving unsafe at times.”

To see if your vehicle has an open recall, click here.