Home » Blog » The Shoes on the Street More Dangerous than Wheels 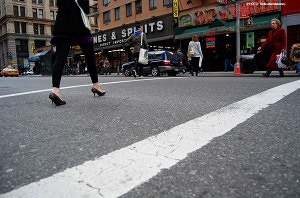 NEW YORK – In a city of more than 8.4 million people, the statistics may be surprising: the Big Apple doesn’t have a lot of car accidents per capita. The obvious answer to this anomaly is due to the high percentage of people who walk or use transportation and in those categories, injuries are way up.

According to data from the New York Police Department, about 64 percent of all fatal car crashes in Manhattan involved a pedestrian. In comparison, the state’s second largest metropolitan area, Buffalo, only 20 percent of its car crash fatalities were people outside a vehicle.

“It’s more dangerous walking around now than ever before because there are so many more distractions to take a driver’s attention off the road and these kinds of accidents are starting to be widely publicized in Manhattan,” car accident lawyer Steve Barnes said.

Recently, the New York Post reported on a woman who was ‘sandwiched’ between two cabs, severely injuring her legs. The NYPD will conduct an official investigation but witnesses told reporters one of the cab drivers was distracted.

It’s not the first time this kind of accident happened on Manhattan streets. Every year, nearly 3,000 people are hit by a car in New York City.

“These victims are often defenseless,” Barnes said. “There’s no airbag, no seatbelt and no bumper to absorb the impact; these are very, very serious injuries.”

There is some good news: last year, 132 pedestrians died in traffic accidents, according to the New York Times. The number is a historic low for New York City following the introduction of the Vision Zero plan. The approach views all car accidents as preventable injuries and the plan’s goal is to eliminate all traffic deaths by 2024.