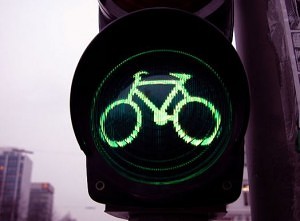 NEW YORK – Millions of cars crowd American streets and highways every morning, resulting in miles of traffic jams, rising stress levels and sometimes crashes. More and more Americans are opting out of the gridlock in exchange for a pair of wheels: a bicycle.

Physical activity, including bicycling, can clearly benefit your health and lifestyle. Depending on your traffic situation, bicycling can also reduce your daily commute. Think about it: you don’t have to sit in traffic and you aren’t restricted to the major highways and roads. Finding a place to park is no longer a frustrating task. Is it convincing yet?

According to the Centers for Disease Control and Prevention (CDC), traffic is a public health risk for the nation’s growing number of bicyclists. The federal agency made several suggestions to make bicycling safer in its newest report, including changes current to roadway infrastructure and speed limits.

Manhattan car accident attorneys at Cellino & Barnes say for some, bicycling to work can be easier and healthier but it also carries more risk.

“Hundreds of people opt to pedal to work rather than drive in Manhattan,” car accident lawyer Steve Barnes said. “On a per-trip basis however, bicyclists are twice as likely to be killed as a person riding in a car.”

Bicycle deaths have rapidly declined since 1975 but researcher at the CDC determined the steepest decline was among children under 15 years-old. This can be attributed to a rise in the use of bike helmets. However, the CDC is concerned with other age groups.

The number of bicyclist deaths among adults over 35 years-old has increased. In fact, the mortality rate has almost tripled for this age group, which includes cyclists who commute to work.

“More people are choosing to walk and bike to work on a regular basis,” Barnes said. “These people are most vulnerable in any type of car crash because they don’t have the same safety protection as a driver in a car.”

Cars have seat belts, air bags and ‘crunch zones’ to protect the drivers and passengers. Bicyclists may have a helmet and some knee pads and pedestrians may not have any protection at all.

After all, cycling is the healthiest option when faced with the choice of walking or driving.

“Speeding is a factor in a great number of injury cases,” Barnes said. “Cities are just now discovering that minor changes – like restriping can influence drivers to slow down.”

Manhattan car accident attorneys say bicyclists must take a proactive approach to safety as well. That includes abiding by all the rules of the road and wearing a helmet, even when it is not required by law.