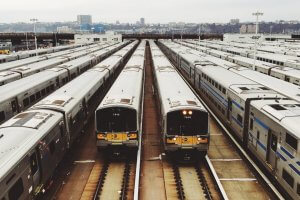 NEW YORK – If you live in the northeast, chances are you’ve taken the train once or twice. Around 1 million people ride commuter trains in the New York City area each day and some of the busiest railroads operate in the northeast… but there’s a problem.

The northeast rails continue to lag behind their West Coast counterparts in terms of safety. Federal regulators said many railroads along the Pacific coast have installed – or begun installing – sophisticated ‘positive train control’ technology or PTC. Safety experts say PTC will reduce the number of train crashes involving speed or other human factors but the northeastern rail lines are still far behind when it comes to implementing this life-saving tech.

According to records filed with the Federal Railroad Administration, the Long Island Rail Road, NJ Transit and Metro-North Railroad have all made little progress on installing the GPS-based PTC. Records show that none of the railroads have implemented the technology although several employees have been trained to use it.

The New York Metropolitan Transit Authority told the AP that the data doesn’t accurately reflect the progress they’ve made and all of the railroads are on track to meet a December 2018 deadline; a deadline Congress has already pushed back before.

A New York Train accident lawyer at Cellino & Barnes says PTC is already being used in places like the west coast, where Metrolink has been using the technology for over two years.

“This safety feature can use satellites and global positioning systems to track and monitor train speeds in New York,” train accident attorney Steve Barnes said. “If a train is moving too fast, the system can slow down or stop a train almost instantaneously, so it can reduce and possibly eliminate the human error which is a common factor in most train crashes.”

Investigators have said that PTC could have prevented at least 25 major train crashes over the past two decades, including deadly crashes in New York City and Philadelphia that claimed 12 lives and injured dozens.

In both crashes (2013 and 2015, respectively), the trains traveled along sharp curves in the track at more than double the area speed limit. Investigators in New Jersey are also looking at the possibility that PTC may have prevented a destructive crash at a Hoboken, New Jersey train station, where a commuter train plowed into a wall at speeds that were well above the speed limit.

On the West Coast, the busiest rail line is Caltrain – but it doesn’t carry nearly many daily riders as the massive train companies in the northeast. Caltrain and Metrolink have roughly 100,000 riders each day – combined. Positive Train Control is implemented on almost every mile of track that the rail companies own and West Coast railroads that don’t have the technology completely in place are still leaps and bounds closer than the big northeast railroads.

If you or a loved one has been injured in a train accident, the lawyers at Cellino & Barnes can help you get the best result possible. With offices across New York State, our attorneys understand how important rail safety is – and when passenger safety is neglected, our New York train accident attorneys can investigate the crash and use their experience in court to make sure your family receives fair compensation.