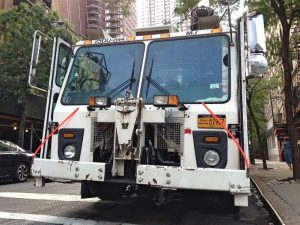 Police say they’re searching for a truck driver they say hit and killed Deborah Mutell, 67, of Brooklyn, then drove away.

Accident investigators were at the intersection of 86th Street and Bay Parkway just after 4 a.m. Thursday morning. According to NYPD, Deborah Mutell was struck and dragged by a private sanitation truck.

The investigations unit spent hours reviewing video taken from nearby security cameras in order to help identify the hit-and-run vehicle.

Just hours after Deborah Mutell was struck and killed by a sanitation truck, another woman was hit by an MTA bus near Flatbush and Flatands avenues in Brooklyn.

The MTA said the accident involved the B-41 bus, which remained at the scene of the accident. Police said the woman who was killed had missed her stop, and the bus driver tried to pull over to let her off.

Investigators said that the woman then forced the doors of the bus open while the vehicle was moving. As a result, she fell out of the bus, hit a pole, and was run over by the rear wheels.

The victim was not identified and police said the incident remains under investigation.

To date, at least nine pedestrians have been struck and killed by vehicles in New York City, according to police.

The latest accidents come just days after city officials met with trucking associations to brainstorm new initiatives that could help address the problem and curb the spate of road deaths throughout the five boroughs.

Any time a pedestrian is hit by a vehicle, the end result can be devastating for families. Truck accident attorneys in New York City say this is especially evident when trucks, buses and other large vehicles are involved. One accident impact not just the victim, but their family, friends, coworkers, and others too.

That’s why many families opt to take legal action against a negligent driver and the companies that employ them. Not only do drivers have a responsibility to operate vehicles in a safe and courteous manner; companies that employ these drivers have a responsibility to make sure they’re well-trained and experienced to handle such a large and dangerous vehicle.

Compensation stemming from a legal claim could help families recover several costs associated with the accident, including:

An experienced truck accident lawyer in NYC should fully investigate the collision, and gather every piece of evidence that could help a victim’s family maximize their recovery. This evidence could include:

If your family has suffered a loss due to a recent truck crash, it’s important to know that there are deadlines that need to be met in order to get the best possible result. The best truck accident lawyers in New York City will make sure all of these deadlines are met and gather every piece of evidence possible to help your family get closure and justice.