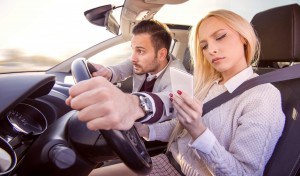 GARDEN CITY, N.Y. – You may have been in this awkward position before: you’re driving. Your phone rings from your pocket or your purse on the passenger seat. Did you answer it? Be honest.

Many drivers choose to take that call or text and too often, it causes a crash.

In fact, some studies say you’re 23-times more likely to cause a crash if you’re texting behind the wheel.

“We’ve seen how heartbreaking and devastating car crashes can be – and most of those crashes are caused by a distracted driver in Long Island,” car accident lawyer Ross Cellino said. “Distractions are now the leading cause of all personal injury collisions.”

According to a National Highway Traffic Safety Administration study, about 660,000 drivers are using hand-held cellphones or another electronic device right now, at this moment.

Researchers say distracted driving is comparable to being drunk. Studies have shown that texting and driving is roughly the same as having a blood-alcohol level of 0.19, which is twice the legal limit in New York.

With all this new information coming to light, police are ramping up enforcement.

Recently, law enforcement agencies have begun a “crackdown” on distracted driving in New York and other states. The Washington State Patrol reported officers pulled over more than 18,000 drivers last year for talking on a hand-held cellular device. Another 4,000 drivers were ticketed for texting – but police believe that’s just a small fraction.

“This is huge problem,” Cellino said. “Even if you’re a safe and responsible driver, your life can be at risk because another driver isn’t paying attention.”

If you’ve been injured because of a negligent or distracted driver, the Long Island car accident lawyers at Cellino & Barnes have experience achieving justice and they can help you and your family get the best result possible from a claim.