Home » Blog » What to do After a Car Accident 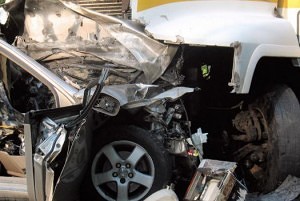 NEW YORK – If you’ve ever been in a car accident, you know there are headaches. Some of those headaches stem from the frustration of working with insurance companies and other headaches could stem from the injuries suffered in the crash. Either way, it’s not a pleasant experience.

Nearly 300,000 car crashes happened in New York State last year, according to the Department of Motor Vehicles. Many of those crashes resulted in serious injuries – with expensive treatments. Some victims could be forced to pay $50,000 or more due to injuries suffered in a car crash.

A Brooklyn car accident lawyer with Cellino & Barnes says it is important to document everything – including your injuries.

“Some victims avoid seeing the doctor or they stop their treatments because of the high medical costs in Brooklyn,” car accident attorney Steve Barnes said. “These choices can be used as evidence against you – so it is vital to see a doctor and get all of your injuries documented following any accident.”

Lawyers say the most important thing to do after a car accident is to assess the injuries and call 911, if necessary. Even if everyone is walking and coherent, injuries can manifest over the next few days, weeks or months.

Some injuries like concussions can slowly develop severe symptoms over time.

“Even if a person doesn’t experience any symptoms immediately after a crash, that doesn’t mean they aren’t injured,” Barnes said. “Many times, the pain gets worse.”

If a person does discover they have been injured in a car crash, accurate records of the accident could be difficult to obtain. Since many police organizations do not have the resources to thoroughly investigate crashes they deem ‘minor,’ attorneys suggest taking the following steps:

Even if an insured driver is found to be at-fault in an accident, they could collect up to $50,000 to cover lost wages and medical bills in Brooklyn.

If you’ve been injured, you may require a skilled attorney who will represent your rights throughout the claims process. The Brooklyn car accident lawyers at Cellino & Barnes can help guide you and obtain all the information necessary to get the best results possible.