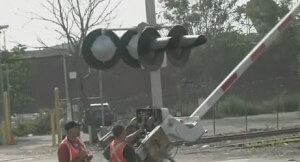 NEW YORK – Have you ever been stuck on the railroad tracks? Helpless, with nowhere to turn, it can quite possibly be one of the scariest moments in anyone’s life. In many train accidents, the railroad and its insurance company are quick to blame the driver for an accident but sometimes it’s not the driver’s fault.

“Statistics show some railroad crossings are more dangerous than others in New York,” train accident attorney Ross Cellino said. “In some of these cases, we find the gates never came down to prevent traffic from entering the tracks.”

Earlier this month, a New York truck driver discovered a malfunction at the gates of a railroad crossing in Queens, which resulted in a fiery collision. Luckily, no one was seriously hurt but members of the New York media investigated the incident. ABC 7 found out the crossing gates never dropped, apparent in dashcam video obtained from a tractor trailer on the opposite side of the tracks.

“When gates don’t drop, it puts the driver in danger, it puts the train conductor in danger, and it can put every passenger in danger,” Cellino said. “The gates and signals at a railroad crossing should always be functioning properly or there could be some liability.”

In the past decade, more than 12 crashes have been recorded at the accident site in Queens, according to Federal Railroad Administration records.

Although repair crews were on-site repairing the crossing gates, eyewitness reports state trains were spotted passing the same intersection with the gates up.

“This can happen anywhere,” Cellino said. “One malfunction, one power outage, can put your life in danger.”