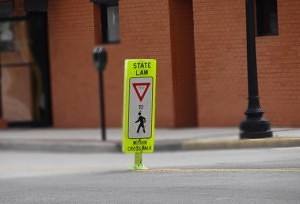 BUFFALO, N.Y. – There’s a battle being waged in your neighborhood. There’s no general or army but this war has claimed thousands of lives. Skirmishes arise every day but they aren’t fought with gun powder or well-sharpened blades. Instead, they’re fought with vehicles and insurance adjusters.

There’s a struggle for supremacy on your street. In some places, the battle line is drawn in an area called a crosswalk.

“More and more pedestrians are getting hurt or killed each year in Buffalo,” car accident lawyer Ross Cellino said. “The rising number of incidents have cities across the country rethinking their road designs.”

An experiment in Kalamazoo, Michigan aims to make crosswalks safer for other cities, too. New signs were insalled at nearly a dozen different crosswalks throughout the area as part of the joint research project being studied by the state’s department of transportation and Western Michigan University.

The crosswalk signs were not only placed along the edge of the roadway but they also appear in the lane lines and centerline. A DOT project manager said preliminary data is promising.

“Governments are rethinking how to design their roads,” Cellino said. “Thinner lanes, for example, can force drivers to slow down and bright signs can catch a driver’s attention to make them aware of crossing pedestrians.”

Unfortunately, not every city has retooled its roadways. Many streets in Buffalo remain unchanged although the city is beginning to restripe roads.

The signs in Michigan have their flaws as well. When it snows, the pedestrian crossing signs will have to be removed by mid-November.

The results of this study are expected to be published early next year.

Buffalo car accident lawyers hope the results can shape roadways in cities like Buffalo and make its streets safer for all modes of transportation.